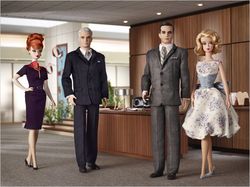 These dolls aren't really designed for kids, of course - they're part of the Barbie Fashion Model Collection and will sell for $74.95 each. But it will be interesting to see if the show's entry into toyland has an effect. Will little girls start dressing their Target-bought Kens and Barbies in natty suits and tiny Betty Draper-style dresses?

In the New York Times article announcing the deal between the show and Mattel, Lionsgate president for television programming and production, Kevin Beggs, comments that Mad Men is tricky to promote, saying, "It's not 'Cougar Town' or 'Desperate Housewives,' where you get it in one line." Beggs says this to explain some of the rationale behind the partnership, which is just one more step in the show's non-traditional branding approach, which has included a line of Mad Men-inspired suits at Brooks Brothers and in-store promotion at Banana Republic.

I wonder, though, if the show's complexity makes it difficult to translate its characters into dolls. When I first saw the dolls, I recognized their characters, but focused on the ways they differ from the "real" people (from left to right in the photo, they are: Joan Holloway, Roger Sterling, Don Draper, and Betty Draper). In doll form, Roger looks a bit like Eric Ripert, Joan is a whole lot less Joan, and Don is nowhere near as handsome as Jon Hamm. To be fair, Betty looks pretty good, though her hair is a tad on the poufy side.

In her post about Video Girl Barbie, Ingrid Fetell wrote that girls enjoy playing with Barbie because they can explore glamorous fantasy worlds through the Barbie character. Adults can do the same when they buy a Mad Men suit. I wonder, though, whether the dolls can provide grownups any of the same type of satisfaction. Do they offer a glimpse into a fantasy world? Or are they just slightly stilted artifacts of that fantasy?

Posted by Kit Pollard on March 10, 2010 in Television, Dolls