London Gets Its Turn At Hollywood Glamour: "Glamour Of The Gods" At The National Portrait Gallery 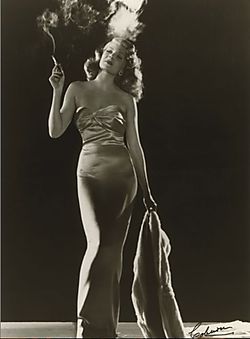 A beautiful exhibit of classic Hollywood portraits is currently on display at the National Portrait Gallery in London. (In December, it moves to the Bendigo Art Gallery in Victoria, Australia.) The exhibit, which draws its photos from the John Kobal Collection, originated at the Santa Barbara Museum of Art, which provided the images for this slideshow, which originally ran on DG in 2008.

The photos all present idealized versions of the stars--but what a range of ideals they represent, from the refined elegance of Grace Kelly to the sultry seductiveness of Rita Hayworth's Gilda, from Vivian Leigh in hyperfeminine white ruffles to Marlene Dietrich tough and dominant in a crisp blouse and slacks. And those are just (a few of) the women. Click the slideshow link for a selection.

Reviewing the London exhibit in The Independent, Matthew Bell praised it for giving visitors a hint of the effort behind the effortlessness:

The most interesting image isn't on the wall. It's tucked in a cabinet and is of Charles Boyer and Irene Dunne, marked up for retouching. A backroom worker has criss-crossed the areas that need work – stubble and hairy hands for him, crow's feet and a flabby jawline for her. If you have been duped into believing in the fantasy of Hollywood, this snap brings you down to earth.

Like Debbie Reynolds's late-lamented costume collection, the John Kobal Collection originated with MGM's previously mentioned mother of all garage sales. In the '60s and '70s, when Golden Age glamour was out of fashion and studios were dumping their archives, Kobal bought and preserved prints and negatives, befriended aging stars and photographers, and documented their stories. Most of the classic images you see reproduced today come from his archives, now licensed by Getty Images.

The George Hurrell photos occasionally featured on DG are exceptions. They're courtesy of our friends at the Pancho Barnes Trust Estate Archive, which has just put together a beautiful new site, including a blog, at GeorgeHurrell.com. If you like classic Hollywood glamour photography, be sure to check it out.