Karl Lagerfeld In Pixels And Plush 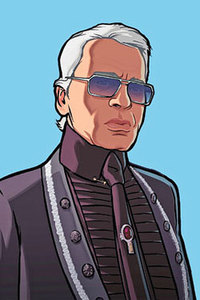 Karl Lagerfeld branches out from his usual roles as designer, philosopher, and diet book author into a new genre--video games. In Rockstar's Grand Theft Auto IV, he's a radio host/DJ, on the K109 The Studio radio station, playing electronica and dance music, which was quite a switch for Liberty City citizens.(Take a listen after the jump.) The game will be available for PC in November, but be warned--he's never on-screen.

Steiff, the venerable German toy company, has recently introduced the Karl Lagerfeld bear. Exclusive to Neiman Marcus, the retails for $1500 and features sunglasses and a KL blinged-out belt buckle. And curse the gods--only 2500 of the lush plushies will be made.

In W, Miles Socha got the gloved one (no, the other gloved one) to admit:

I never played with anything like toys. I wanted to be grown-up.

So, having achieved hyper-adulthood, Lagerfeld now decided to be immortalized in both pixels and plush?