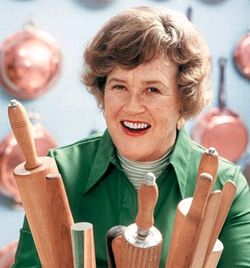 Julia Child is an unlikely glamour girl. Over six feet tall, with long arms and legs and a warbling voice famously parodied by Dan Aykroyd, she possessed none of the sultry airs of Marilyn Monroe or the cool confidence of Jackie Kennedy. But glamorous she was thanks to her larger-than-life personality and her role in helping Americans see food itself as something glamorous.

Put her in the kitchen, surrounded by knives, a raw chicken, and a vat of cream, and Julia transformed into something wonderful. Completely in charge of her surroundings, perfectly at home, and most of all, thrilled to be there. A woman happy to be behind a stove and in front of a camera is not a surprising image today, what with our Nigella Lawsons and Barefoot Contessas and even our Rachael Rays. But in 1963, when Julia Child made her debut on a local channel in Boston, the world – both in terms of food and of women – was a very different place.

In the 1920’s and ’30s, women (and it was always women) spent an average of 30 to 42 hours per week cooking for their families – and that’s in addition to other at-home responsibilities. Back then, cooking wasn’t fun. It was a chore.

By the time Julia Child entered the public eye, women’s roles were starting to evolve. They were entering the workforce, allowing less time to slave over the stove back at home. Food manufacturers were quick to notice the trend and capitalize on it, developing easy-to-make semi-prepared foods. Those dishes might not have been as tasty or healthy as the fresh stuff, but they were a whole lot quicker and easier.

If prepared foods never complete displaced cooking from scratch, we have Julia to thank. She helped American women see the value – emotional as well as gustatory – in “real” cooking.

In a recent New York Times article, Michael Pollan points out that Child’s television debut occurred the same year as the publication of Betty Friedan’s The Feminine Mystique

. Pollan notes that while it might seem, on the surface, that Julia’s position in the kitchen was at odds with Friedan’s take on feminism, in reality, the two were working in concert. He says:

She tried to show the sort of women who read The Feminine Mystique that, far from oppressing them, the work of cooking approached in the proper spirit offered a kind of fulfillment and deserved an intelligent woman’s attention. (A man’s too.)

Fulfillment, intelligence, confidence – these are the qualities that emanated from Julia Child, the ones she passed on to her audience, and the ones that made her glamorous. Plus, the food she cooked was rich, French and (at times) complicated – the most glamorous sort. Pollan again:

Once upon a time, Julia…showed you how you, too, could cook like someone who could not only prepare but properly pronounce a béarnaise. So-called fancy food has always served as a form of cultural capital, and cooking programs help you acquire it....

On Friday, Julia Child’s glamour and charm will be broadcast once again, via Meryl Streep, with the opening of the movie Julie & Julia . It tells the story of Julia’s culinary awakening in post-war France intertwined with the (also true) story of a New York City blogger named Julie Powell cooking her way through Child’s Mastering The Art of French Cooking

. If the trailer is any indication, it’ll be a fabulous movie.

Nearly 50 years after her first appearance on the small screen, Julia’s character still captivates us with her unflinching joie de vivre. As the movie proves, her spirit connects not only to those women she originally influenced, but to women (and men) of younger generations, as well. Like a true icon, and the glamorous woman that she was.