Editor's note: With this post, Albina Colden, a psychologist and visual artist, joins DeepGlamour as a contributor. 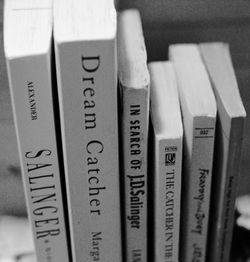 It distressed me to learn the news of J.D. Salinger's death. The man was 91 years old, so it should hardly have come as a surprise. But in our collective imagination, J.D. Salinger had long ceased to be a man and had become a mythical figure.

The image of Salinger - living in isolation in the New Hampshire mountains, wearing L.L. Bean, eating exotic health foods, writing maniacally, and stashing manuscripts in his secret vault - had become timeless, and it was all we had. This mythological narrative invited our imaginations to sculpt it in any way we wished and to infuse it with our own hopes and desires - or with our own prejudices. 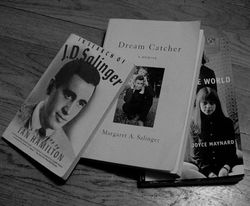 In the media, it was rather sad to see the news of Salinger's death compete with the release of the Apple i-Pad. But nonetheless it did receive some coverage, and the coverage reflects our conflicted perceptions: notions of Salinger as a noble and sensitive romantic who has influenced generations and could hold the key to mysterious truths about the universe, versus notions of Salinger as a controlling, misogynistic weirdo who has made all those close to him miserable.

The New York Times describes Salinger's work as possibly the greatest of our time, but in the same breath remarks that he is mostly “famous for not wanting to be famous”. Bret Easton Ellis declares on twitter that he is happy about Salinger's death.  CNN reminds us of his “affair with the teenage Joyce Maynard” (though the wording was later changed), who was in fact a 19-year-old adult when she lived with Salinger. And of course, speculations abound as to whether there really are unpublished manuscripts in the vaults that are rumored to be in his home. Perhaps he produced masterpieces but instructed his lawyer to burn them. Or perhaps he scribbled nonesense in his study day after day, or wrote nothing at all. With his estate as protective of his privacy as Salinger himself had been, we may never know the answer. 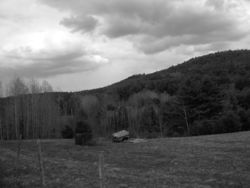 In 2005 I had just finished graduate school and began my first job, at Dartmouth College in Hanover, New Hampshire. I moved into a house in a nearby town and discovered that I was practically “neighbors” with J.D. Salinger - at least in the rural sense, where the nearest neighbor can be a mile away. I knew where Salinger lived, as many people in that area did. I passed the winding road that led to his house on my commutes to work and back every day. But I never saw Salinger and never attempted to see him - not even to catch a glimpse at one of the local events he was said to always attend. In retrospect, I had wondered at this restraint on my part, especially as he was one of my favorite writers. But now I think I understand: It wasn't so much restraint, as a means of protecting myself against disillusionment. I did not want to see Salinger, because I did not want to know which version of him was real, if any. 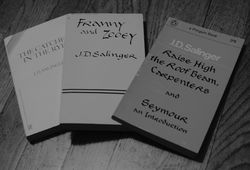 In the end, it matters not a bit what kind of a person Salinger was, whether there really are any unpublished books in that vault, or for that matter, whether there is a vault at all. In his existing body of work J.D. Salinger has given us a great gift, and may he rest in peace.