With the state’s never-ending budget crises, jammed freeways, and high cost of living, California dreamin’ is out of style. “We are now the state that can’t,” Stephen Levy, the go-to guy for quotes about the California economy, told the NYT earlier this week. Calling the state “increasingly ungovernable,” the WaPost's Dan Balz writes:

The rest of the country has long looked to California as the future. It was once a leader in developing public infrastructure, and it created the most enviable system of public universities in the nation. Now the nation sees California and worries that its economic and political troubles will infect other states.

So the answer to the question at the top of this post would seem to be NO WAY!

And why would Apple label all its products “Designed by Apple in California”? (This unaffiliated Apple reference site even adopted the slogan as its domain name.) Ferraris and iPods are both glamorous products. Why connect them to an unglamorous place?

In a post from 2007, Joel Spolsky gets the psychology exactly right: 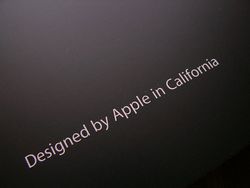 You think of California, not the actual state, with its endless dismal boulevards full of muffler shops and donut stores, but the California of memory: the Beach Boys, the Summer of Love, and the beatniks, a utopian land of opportunity, an escape, where you go when you leave behind the cold winters and your conservative parents back in Cleveland.

And “Apple” in California is, of course, on the literal level, a computer company, and not a very nice one, but put those words together and you think of apple orchards, and the Beatles, and you think of how Forrest Gump got rich off of Apple stock. And “designed in California...” It's not made. It's designed. In California. Like a surfboard. Or a Lockheed XP-80.

And, of course, it might distract your attention from the fact that we no longer make things like this in America. We design them, but they pretty much have to be made in China.
Either way, the iPod slogan Designed by Apple in California triggers a flood of emotional responses that just make you happy to have selected this MP3 player.

I think there’s something else operating as well. California may seem too familiar and troubled to Americans in other states, but it still has glamour abroad. The UCLA student store attracts Asian tourists stocking up on souvenirs. The Ferrari California is aimed particularly at buyers in China and Russia. Is the Golden State still glamorous when seen from afar? And, if so, does distance explain the glamour, or is there something more?
[Designed by Apple photo from iPod Nano by Flickr user ume-y under Creative Commons license http://www.flickr.com/photos/ume-y/ / CC BY-SA 2.0]