If Someone Glamorous Walked By, Would You Notice? 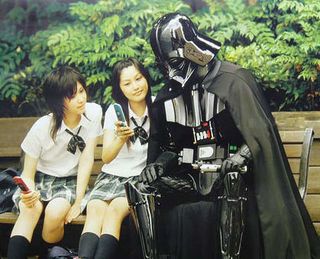 If you were on your cell phone, probably not. In Psychology Today Ira Hyman, Jr. reported that 75% of people walking on a path while talking on their cell phone didn’t notice someone in a clown suit ride near them on a unicycle. You might even have missed this image of Darth Vader interacting with Japanese school girls. Hyman discusses how using a cell phone absorbs our attention, just as it did for the two commercial airline pilots that flew past their airport.

Surprised to learn that while on a cell phone he had walked past one of his good friends without seeing him, Jim Nelson, editor-in-chief at GQ, wrote an editorial on what he calls “inattentional blindness.” Mentioning Hyman’s findings, Nelson writes that, “Cell phone conversations demand a different neurological engagement, causing us to create mental imagery that drowns out “the processing of real images.”

Perceiving glamour requires that we process images, because glamour is partly an act of projection. Only after some image has successfully captured our attention is it possible for us to project onto that image the aura of glamour. This can happen instantly if the image sparks our desire to be like someone, to own an article of clothing, to drive that car, and so on. We sometimes imagine our life being transformed if only this fantasy were true. Images that we find glamorous have generally been calculated to trigger such projections by showing their subjects to best advantage, without revealing messy aspects like cost, effort, and flaws.

I use a cell phone and an iPod Touch, and I find both to be great tools. But like Nelson I find it sobering to realize that the mental processes involved in using my techno gadgets may sometimes drown out my mental processing of images in the world around me.


Posted by Randall Shinn on March 25, 2010 in Appearance, Technology