Hidden Treasures: From Hurrell To Hats, Collectors Preserve The Arts Of Commerce 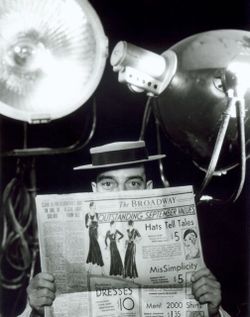 Tonight’s DG party celebrating the glamour of hats (and our first anniversary) includes some rarely seen highlights from two museum-quality collections, both hidden away in Los Angeles-area homes.

The first is the Pancho Barnes Trust Estate, the largest privately held collection of vintage George Hurrell photographs, to which we also owe the beautiful photo of Dorothy Jordan that alternates with Rick Lee’s woman in sunglasses as our masthead. At the party, we will have an ongoing slideshow of more than 40 Hurrell photos of people in hats, including many rare treasures like this perfect-for-the-occasion shot of Buster Keaton.


The photos range from the Golden Era glamour of Marlene Dietrich, Douglas Fairbanks, Greta Garbo, and Carole Lombard (and, of course, the beautiful Anita Page photo on our invitation) to portraits from the 1970s and ’80s. It's an unusual Hurrell show, where Aretha Franklin and Bianca Jagger appear more often than Joan Crawford. But Crawford will be making a special appearance, since Lou D’Elia, the collector behind the Pancho Barnes archives, is also lending us one of the large-scale, limited-edition prints recently issued by the Estate of George Hurrell. 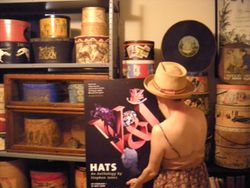 The second collection is Wendy Ann Rosen’s House of Hats, the best collection of 20th-century hats outside a museum. Wendy Ann, a makeup artist by trade, not only collects hats. She keeps them in a world-class collection of vintage hat boxes. Some of her hats are included in the V&A’s recent Hats: An Anthology exhibition, curated by Stephen Jones. Those hats are still traveling the world, but others will be on display at 5th & Spring--and available for purchase, since Wendy Ann is, as they say in the museum business, deaccessioning a few of her more than 600 chapeaux.


Wendy Ann is one of L.A.’s hidden treasures, someone only a few aficionados know about. Working on her own, mostly in the 1990s, she researched the history of 20th-century millinery and identified, bought, and preserved the best examples of the milliner’s art. (Here's a fashion spread featuring some of her hats from the 1920s, aquired through the Adamson Estate.) In addition to hats and hat boxes, she collects tools of the hat-maker's trade, signs and other ephemera, and the adorable cupcake-sized mini hats and boxes that were used as milliner's gift certificates since hats were custom-fitted. (Alas, she's not bringing any of the mini hats. Partygoers will have to make do with literal cupcakes.)


Although some of Wendy Ann's hats are from famous fashion designers, including Chanel, Dior and Schiaparelli, many are from hat specialists like Madame Georgette who were renowned in their day but are now forgotten. “I want to make sure that they're recognized and remembered. That's my main purpose,” she says.


DG's party, "You're the Top: A Celebration of Glamorous Hats & the People Who Wear Them," is free and open to the public as part of the first Downtown Fashion Walk. RSVPs are appreciated but not required. See our invitation for details on the location. Ample parking is available in the garage at 530 S. Spring for $5. The map for Downtown Fashion Walk is online here.