How Did Project Runway Jump The Sharkskin Pump? 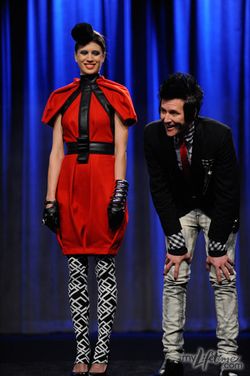 In a minor victory for age-inappropriate hipsters everywhere, Seth Aaron Henderson took the title of reigning champion of Project Runway last night in a collection inspired by "1940s Russian-German military style." (Oh what I would have paid to see the look on Michael Kors' mother's face for that gem!  You know he took hell for that one at seder in the Hamptons.) This year's finale theme was "trends that everyone else discovered a few years ago."  Patent leather?  Gasp!  Mustard yellow and bright blue? Don't tell Mr. Jacobs. He'll never think of it.

Ah, to return to those halcyon days when Wendy Pepper was sending  gowns down the runway to the dramatic strains of "A L'Infini," or to have but one glimpse of another ombre feathered creation by Christian Siriano. Drama! Music! Sizzle!  At certain fabulous workplaces, fashionistas would scramble to the water cooler the morning after a Runway finale to dissect every last button on the final collections and defend their designers to the death. But Season 7 not only failed to inspire, but it may have achieved the unthinkable: to de-glam the notion of showing at Fashion Week. This season's collections were, to quote one of Padma Lakshmi's best lines of all time from reality television, "pedestrian at best." This is saying a lot after Season 6, where the unlikeable Irina Shabayeva proved that one really can escape the doldrums of bad taste with a rescue ladder made of pleather and fur, and Season 5, where the milk-toasty Leanne Marshall designed a collection so forgettable that I had to Bing it to remember the signature piece.

So how did Project Runway jump the sharkskin pump and lose its glamour?  DG offers 3 reasons:

1.  The move to Lifetime.  Notwithstanding the great strides that "Television for Women (and Gay Men)" has made over the past few years, this used to be the network that considered re-runs of Supermarket Sweep and The Golden Girls to be its anchor programing.  Watching Runway in high definition on Bravo gave the show an air of cool, current relevance, but Runway on Lifetime feels like wearing a Dior gown for a coffee date at Wal-Mart.  I can't see a commercial break for Drop Dead Diva and then return  to a program purporting to show me haute couture.

2.  The heavy hand of the marketing department.  Frankly, the Bluefly.com accessories wall, even when used thoughftfully under the watchful eye of Uncle Tim, is an eyesore. (Remember when Kara Saun got into a throw-down with the producers in Season 1 over those fantastic shoes that may have put her over-budget? Can you imagine telling Kara, "but look at those lovely metallic flats on the Bluefly.com accessories wall!") Models on the Runway was another misstep.  Does Lifetime not watch the CW? An ANTM rip-off may have been timely a few years ago, but not when Tyra's girls are now just as likely to end up in (or under) the Rock of Love tourbus with Bret Michaels. But perhaps the lowest point of Season 7 was watching Vivienne Tam hawk an HP TouchSmart PC in somewhat broken English as part of the "fashion meets technology" challenge. Even the designers were visibly unethusiastic about such gross product placement.

3.  Judging fatigue. Could Nina Garcia possibly be any more bored with the show?  We used to live for Nina's caustic critique, but after career demotion and new motherhood, Nina seems to lack the energy to muster much more than a raised eyebrow for an unfinished hem. Inspired by Michael Kors, I live for an opportunity to describe an outfit as looking "like a dinner napkin just crumpled up" or "a paper brioche."  Where were the zingers for this season that brought bitchy fun to the last 10 minutes of the show?

What could bring back the glamour to Season 8?  Give us your thoughts in the comments.