Woman At A Mirror: The Glamour Of The Toilette 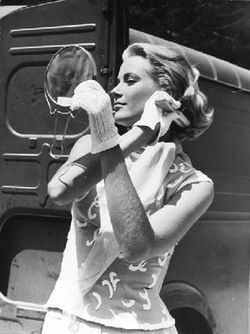 Recently up for auction, this Edward Quinn photo of Grace Kelly primping during the filming of To Catch a Thief presents an usual take on a common artistic subject: the beautiful woman at the mirror. From such classics as Diego Velázquez’s Rokeby Venus and Kitagawa Utamaro’s portraits of beauties at their mirrors to this Mark Shaw photo of Audrey Hepburn, the usual composition uses the mirror to give the audience multiple views of the subject: front and back, the face from different angles, the woman as she sees herself and as she is seen by others.

Here, however, we see Grace Kelly entirely from the outside. We do not see the reflection she sees. Rather than a woman of fragments and angles, she appears in a unified view. The photo is a study of surfaces and textures: the shiny, soft hair she is brushing, the lacy gloves, the ornate top, the golden down on her tan arm, the shiny mirror overlaid on the dull trailer. The focal point, framed by her crossed arms is Grace’s face, made even more focal because we know she, too, is looking at it.

The glamour of the toilette points up the difference between male and female audiences (or, to use a phrase encrusted with all sorts of ideological theory, the male and female gaze). For male audiences, portraits of women grooming themselves have traditionally had a voyeuristic quality and were often an excuse for nudity. Projecting himself into the image, the viewer does not generally identify with the subject but with the scene; he imagines not being the subject but being with her. A female viewer is more likely to identify with the subject. She sees herself in the mirror—or longs to.

That feeling was articulated by many of the movie fans interviewed by Jackie Stacey for her study Star Gazing: Hollywood Cinema and Female Spectatorship

. Recalling their youthful filmgoing in the 1940s, women expressed longing and identification when talking about the stars they loved. “It wasn’t Ginger Rogers dancing with Fred Astaire, it was me,” said one. Another said, “My favourite was Rita Hayworth. I always imagined if I could look like her I could toss my red hair into the wind…and meet the man of my dreams.”

For women in particular, there is a second kind of glamour of the toilette: the makeover fantasy, which combines the desire for transformation with the idea of being pampered by professionals. “It’s exciting to have important people do stuff for you,” said a nurse from rural Arkansas on ABC’s Extreme Makeover. Hollywood stars not only represent the promise of beauty and fame but also—thanks to their squadrons of makeup artists, hair stylists, wardrobe designers, and, nowadays, everyday fashion stylists—the dream of having an aesthetic entourage on call.

Posted by Virginia Postrel on November 10, 2009 in Photography, Appearance, Art