Glamour & Transformation: Who Do You Want To Be Today? 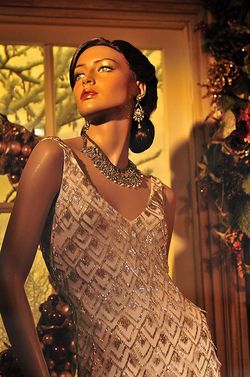 “The right dress,” said MGM star Norma Shearer in 1934, “can triumph over any situation, build any mood, create any illusion, and make any woman into the sort of person which she most desires to be.” Every store display and shop window beckons with some version of the same promise: Buy this and become the person you want to be.

There’s a difference, however, between spotting the perfect office outfit in Banana Republic and imagining yourself bedecked in a beaded evening dress with chandelier earrings. One represents an attractive solution to a practical need, the other (for most of us, anyway) the allure of transformation: a new and better self in a new and better setting. One is appealing, the other glamorous. We want the dress for the very reason that it doesn’t suit our real life. It makes us imagine a different one.

“I fall for the awesome four-inch heels every time, hoping to strut around like an archetypal fashion girl,” said Joanna Jeffreys, fashion manager at Harvey Nichols, a couple of years ago in British Vogue. “But then morning comes, and the idea of running for the number 10 bus in my Alaïa stingray-skin platforms doesn’t seem so appealing.” She buys the shoes that reflect who she wants to be, only to find them inappropriate to who she really is. That’s glamour: a beautiful illusion promising escape and transformation.

Clothing and accessories aren't the only products that rely on such glamorous salesmanship. I’ve written elsewhere about the glamour of wireless technology, with its illusory pledge to set users free from desks, cubicles, electrical outlets, and, by implication, from bosses and deadlines. Nowadays, wireless technologies are quotidian essentials, but not so long ago they were glamorous. 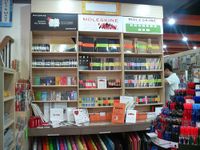 Here’s another store display that traffics in glamour. (“AAH! i’d go so broke if i lived by there,” says a Flickr commenter.) To take notes, you can pick up a cheap pad at Staples. To imagine yourself an artist, however, you may prefer to buy one of the “legendary notebooks” of Moleskine. It's not just a tool. It's a promise, an emblem of the creative life. (Check out this shot of a Moleskine with other icons of the glamorous writerly life.)

I’m personally susceptible to the glamour of any display of narrow-lined notepads, whether generic office supplies or leather-bound versions with ties to Picasso and Hemingway. But, then, I really am a writer. I’m not looking to transform myself into a Lost Generation heroine, only to transform my thoughts and words into something more organized and permanent. I don’t want an emblem. I want a magic tool. So I have an office full of notebooks, every one a promise of transformation.

Posted by Virginia Postrel on July 27, 2009 in Retailing