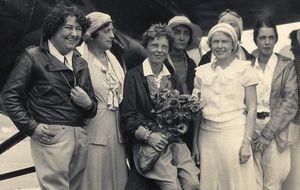 Amelia Earhart was daring, adventurous, modern, and beautiful, among the 20th century’s most enduring icons. Sixty years after her disappearance, high-profile advertising campaigns for Apple and the Gap were still employing her image as a symbol of independence and glamour. A movie about her must have seemed like a sure thing. Yet Amelia is a critical and commercial disaster. What went wrong?

It would be easy to blame the project’s specifics. Director Mira Nair did, after all, manage to turn Thackeray’s lively satire into the ponderous, unwatchable Vanity Fair

. A less earnest director or more creative script might have produced a more interesting Amelia, one less reliant on half-hearted soap opera and more focused on the challenges of early aviation. But the real problem may be Amelia Earhart herself.

In the 1920s and ’30s, “the aviatrix was the ultimate glamorous and daring modern woman,” notes Kristen Lubben in Amelia Earhart: Image and Icon

, the catalog for a 2007 exhibition of Earhart images at the International Center of Photography. Earhart, of course, was the ultimate glamorous aviatrix. She achieved that status not because she was the best female pilot—many were better—but because she was media-savvy and able to embody the public’s multiple aspirations. She was feminist yet feminine, casual yet elegant, modern yet wholesome. “Hers is the healthy curiosity of the clean mind and the strong body and a challenging rebuke to those of us who have damned the youth of the land,” declared a 1928 essayist who saw her as an antidote to Jazz Age decadence. He concluded, “What a girl!” Such a glamorous figure makes an effective advertising icon but an emotionally flattened protagonist. She loses her individuality.

During her life, Earhart was transformed from a person into a persona—idealized, distant, and glamorous, her mythic allure heightened by the mystery of her disappearance. The more time passes, the more her individuality recedes. “She has become an increasingly abstract symbol—of the thrill and danger of adventure, of the possibilities for women, and of the courage to break with … conventional expectations,” writes Lubben. Eternally young, Earhart remains unblemished from the kind of eccentricity or controversy—or ordinary individual complexity—that could make her a compelling subject for a modern biopic. To preserve her glamour, Amelia must keep her at a distance, without flaws, doubts, or character development. We learn nothing of the struggles of her youth, her political commitments, or her limits as a pilot. She ends the film essentially the same as she began it—as an icon.

Here, another recent film about a pioneering aviatrix presents a sharp contrast. Currently making the film-festival rounds and expected to air on public television in the spring, The Legend of Pancho Barnes and the Happy Bottom Riding Club is a straightforward documentary made on a tenth of Amelia’s production budget. Yet for all its still photos and talking heads, it is far more entertaining. While Amelia struggles against the glamour of its heroine, The Legend of Pancho Barnes is imbued with its protagonist’s charisma. The contrast between the two pilots, and the memories they left behind, illuminates the distinctions between these two often-conflated qualities.

Read the rest and see a Pancho Barnes slide show on DoubleX.