Glamour And The Multiplicity Of Desire 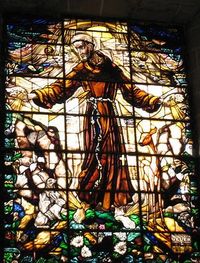 Randall’s post on modesty as “anti-glamour” provoked an interesting discussion in the comments. “It’s funny that you should regard modest clothing traditions (headscarves, veils, etc.) as inherently anti-glamour. Didn’t a piece about the glamour of nuns appear in this space not too long ago?” challenged commenter bearing. She noted the glamour she finds in Franciscan habits, as well as her young daughter’s attraction to the clothes worn by some Somali playmates.

In his post and subsequent comments, Randall seems to equate glamour with sex appeal, beauty, or opulence, while Bearing has something more emotional and multi-faceted in mind. Their back-and-forth raises fundamental issues about glamour and desire. And, much as I admire his thinking, I have to disagree with Randall. Modest dress is not intrinsically anti-glamour. It all depends on the audience.

One of the central themes of my book-in-progress is that glamour is not a style but a quality that stokes desire—of many different kinds—and inspires imaginative projection. Glamour concentrates what the Japanese call akogare: desire, longing, aspiration, and idealization, with a suggestion of the unattainable. Its promise of transformation and escape taps longings for whatever the audience finds absent in real life. The common desires to be beautiful, wealthy, or desired are particularly amenable to glamour. But there are many forms of desire, and thus of glamour, besides luxury and sex. The desires glamour expresses—for love, wealth, power, beauty, sex, adulation, friendship, fame, freedom, dignity, adventure, discovery, self-expression, or enlightenment—vary from person to person and culture to culture. Many of those desires are quite compatible with modest dress. 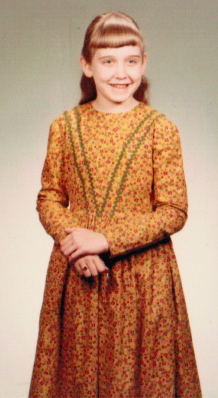 It seems obvious to me, for instance, that the nostalgic dress of Renaissance Faires and other historical re-enactors is all about glamour, however modest the attire may be. (And, as Randall notes, it is not always modest.) Here’s my version circa 1968 (don’t you love the crooked bangs?), wearing the antithesis of the miniskirts that were my normal school attire. My mother made this “pioneer girl” dress for me as a Halloween costume, and it was my favorite. I wasn’t exactly nostalgic for the 19th century, but the difference between that dress and ordinary life did make me feel special. As a child in the 1960s, where short skirts were the norm, I found long skirts glamorous. Reserved for the past and for adult special occasions, they appealed to my desire to escape the everyday.

Bearing’s comment about Franciscan habits reinforces my book's most controversial argument about glamour: It can take religious form. One can yearn for unity with God, for righteousness, for a special spiritual state just as one can yearn for wealth or fame. And, just as glamour can be used to sell movies or fashion or beach holidays, it can be used to sell religion. Much, though by no means all, traditional art traffics in glamour. It uses mystery and grace to encourage viewers to project

themselves into the scene, where they might witness in person the exemplars of their faith and feel their own spiritual yearnings satisfied. The simplicity of a Franciscan habit can thus be glamorous to someone who sees in the garment the fulfillment of spiritual desires, overlooking the drawbacks and the quotidian practicalities of Franciscan life.

Finally, and most trivially, within a culture where modest dress is the norm, a given outfit may be more or less glamorous, depending on how the viewer imagines feeling in it. A woman browsing the Sharah Collection of clothes for Muslim women is clearly meant to imagine herself transformed by its offerings every bit as much as a woman browsing any other fashion catalog.

The obliteration of identity created by a full burqa may be incompatible with glamour, but other forms of modest dress are not. As Randall himself notes, veiling may increase glamour by fostering mystery and grace. Just check out the cover photo on Len Prince's About Glamour

[Stained glass window from the convent of San Francisco in La Paz, Bolivia, by Flickr user jimcintosh, who has a set of Franciscan images here. Used under Creative Commons license. Woman in scarf from Sharah online catalog.]