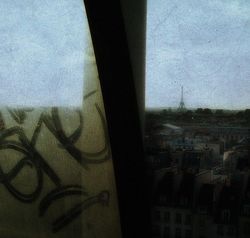 "Glamorizing" usually implies an active effort at editing out flaws: retouching photos, showing cigarettes without smoke smell or cancer,  celebrating cliquish bullies as Queen Bees and Gossip Girls. But, as these two contrasting passages from classic works illustrate, glamour can also arise from the audience's willingness or proclivity simply to overlook flaws.

"Come where there is some freshness, for a few moments," he said; "that house is a mere dungeon: don't you feel it so?"

"It seems to me a splendid mansion, sir."

"The glamour of inexperience is over your eyes," he answered; "and you see it through a charmed medium: you cannot discern that the gilding is slime and the silk draperies cobwebs; that the marble is sordid slate, and the polished woods mere refuse chips and scaly bark. Now HERE" (he pointed to the leafy enclosure we had entered) "all is real, sweet, and pure.

No words of mine can tell you how Wendy despised those pirates. To the boys there was at least some glamour in the pirate calling; but all that she saw was that the ship had not been tidied for years. There was not a porthole on the grimy glass of which you might not have written with your finger "Dirty pig"; and she had already written it on several.

As anyone who has ever framed a photographic shot only to notice dirt on the window or wires across the view knows, the mind always does some unconscious editing. (Those of us in love with Florence rarely notice the ubiquitous graffiti.) But I think there's a deeper truth here that applies equally to overt glamorization: Glamour only works on the receptive imagination.

Some people are--to say the least--as immune to Barack Obama's glamour as Wendy was to that of the pirate calling. Even the "world's most glamorous couple" gets mixed reviews. “I fail to see the glamour of this couple,” writes a website commenter about Brad Pitt and Angelina Jolie. “They usually look like aged hobos.” Although Princess Diana remains a touchstone of late 20th-century glamour, there are plenty of skeptics. A “glamorous” person, setting, or style will not produce glamour unless that object resonates with the audience’s aspirations, and unless the audience is willing to entertain the illusion.

Posted by Virginia Postrel on March 30, 2009 in Books, Photography, Grace