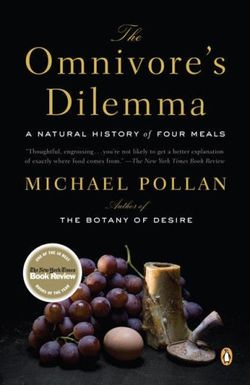 Today is the 75th anniversary of Penguin Books and the company is celebrating by giving away Penguin books to blog readers all over the internet - including here, at Deep Glamour. The book we'll be giving away is The Omnivore's Dilemma

, Michael Pollan's thought-provoking examination of how the food we eat is grown.

Pollan is part of an interesting trend in the food world, and his work points to the important role of glamour in American consumer behavior. His efforts to help Americans better understand what they eat (and to eat better) are largely about deglamorizing food by taking the mystery out of the food creation process. Hard as it is to imagine now, during the middle part of 20th century, mass-produced foods had a certain allure. They were blessed by the glamour of modernity. Most of that glamour had rubbed off by the end of the century, but mass-produced foods still retained a tiny touch of mystique. By stepping inside industrial farming, showing his readers how the metaphorical sausage is made, Pollan helps eliminate that last little bit of glamour.

At the same time, if you want to change the world (or, in this case, change how Americans shop), it's not enough to simply gross people out at the sight of plastic-wrapped ground beef. For one thing, that beef is less expensive than buying from a small, organic farmer. For another, it's how Americans have shopped for several generations now. We're used to it. If we're going to change, we need a good reason to stop doing what we're doing and a good reason to start doing something else.

Pollan recognizes this. He knows that Americans need not just good food to buy, but a good story behind that food. To get the good story, the people growing the food need to be passionate - and glamorous - themselves. In a 2006 interview with Powell's Books, he said:

You need more people on the land to do it well, so we have to make farming a more glamorous profession. That's one of the great things Alice Waters has done. She's taken that light of glamour and shown it on farmers by highlighting their menus and putting the ingredients in the forefront of her presentation.

Culture has devalued farming for a hundred years. Go back to Jefferson and nothing was more glamorous—not that glamour was the kind of word he would have used, but glamour is very important in a culture. To the extent that we value farming, more people will want to do it and we'll begin to repopulate the countryside. That will be a very positive step.

Pollan said that four years ago. In the time since, sustainable farming has continued to gain supporters and cache. However, it's still outside the mainstream and it's still expensive.

If you'd like to win a copy of Pollan's The Omnivore's Dilemma, please leave a comment below. You can say anything to enter, but we'd especially like to hear about what role glamour plays for you when you're thinking about food. We'll choose one commenter at random to win the book, which will be sent directly from Penguin. The deadline to enter is midnight Pacific Time, Thursday, August 5.