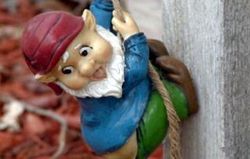 Sophisticated gardeners typically view garden gnomes as kitsch. However, I do know one sophisticated gardener with a weakness for gnomes who has a few scattered in a large garden on a property of several acres. She jokes that she has heard that each gnome she displays lowers the value of her property by a thousand dollars.

In this light, it is fascinating to read the pages of comments on a Colorado’s 9News story which relates that someone stole almost 150 gnomes from the front landscape of an Arvada, Colorado home. Some readers sympathize with the home owner’s comment that, “You can’t have anything nice anymore.” Others argue that her idea of “nice” must have been amazingly tacky, and that someone did the neighborhood a service by getting rid of what had to have been a kitschy eyesore.

To raise money for breast cancer research, the Colorado Women’s Resource Center has advertised that they will place of flock of 20 plastic pink flamingos on a friend’s lawn for one day for a fee of $30. Knowing that displaying a flock of pink flamingos puts the homeowner’s taste in question, they also offer anti-flocking insurance for $10—just in case you fear that one of your “friends” might impose them on you.

Posted by Randall Shinn on October 27, 2010 in Appearance, Real Estate