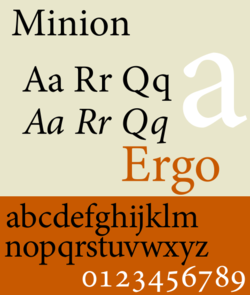 Earlier this week Apple released an update to the font rendering part of OS-X 10.6 because there had been a problem with rendering some Open-Type fonts. Adobe’s Minion-Pro has become my favorite text font for music notation, and I had been baffled when Minion Pro had stopped working in Sibelius, the music notation software that I use.

As soon as I saw the notice of the update, I became excited, thinking that this might solve the problem, and “hooray!” it did. At breakfast I began excitedly telling my wife about all this, telling her how beautiful the font is, and how it was designed by the same designer who had designed Arno Pro, and that the designer was named Robert Slimbach. I knew I had gone too far when I recalled the font designer’s name off the top of my head, and, sure enough, my wife gave me an OMG-I’m-married-to-a-geek look.

I had been using Times New Roman in the meantime, but it is hard to explain how much more beautiful I thought the opera score I was working on looked with the text in Minion Pro. Minion has become one of the most popular book fonts since its release in 1990. It is simply beautiful, if not glamorous—assuming you are into fonts.

And it looks especially nice on the 30-inch backlit LED Apple Cinema Display screen I recently purchased because I was so jealous whenever I saw my wife using hers. It was the only choice that she had when she bought a new Mac Pro, but as soon as I saw it I knew that sooner or later I had to have one too. Ultimately there was no justification for my buying a new display, but I did, and now everytime I bring up a music score, and I look at this beautiful screen (now displaying Minion Pro as the text font in all its glory), it makes me happy. And, I want to compose. In this case a glamorous screen and a glamorous font help motivate me to work.