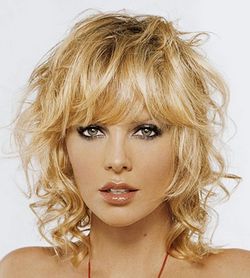 As a word glamour is tricky to define. Whether any of us experience something as being glamorous depends on our individual responses. I find Charlize Theron’s hair and makeup wonderfully glamorous in the photo at left, while others may not. I feel certain that the intent was to create a glamorous photograph, but intending something to be perceived as glamorous does not insure we will all respond to it in that way. 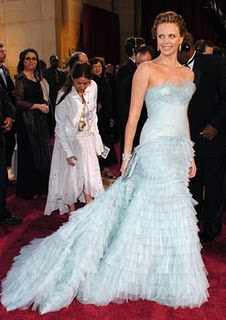 In dressing for the Oscars, Theron has made some choices that bombed with most fashion critics. Most people felt that the Christian Dior dress that she wore to the 2010 Oscars looked regrettable on her, and it made many worst-dress lists. The Christian Dior dress (shown at right) that she wore to the 2005 Oscars was panned by some as suitable for a high-school prom, but most loved it, and it has appeared on several lists as one the best Oscar dresses of the decade. When you see a large photograph of her making her entrance onstage in this dress, you can almost imagine that it was chosen knowing what the stage colors and design were going to be. The effect of the dress in relationship to that stage design is stunning.

In a situation when something strikes us as stunningly glamorous, the archaic meaning of glamour as magic or enchantment still seems relevant. What we experience seems to cast a spell on us, and what we perceive seems like an enchantment. Even while under the spell, we may sense that what we are experiencing is in part a transient, artful conjuration, and that everything possible has been done to try to make us feel we are experiencing glamour at its epitome, fully incarnated.

Small wonder this is so difficult to pull off—the slightest incongruity can break the spell of glamour. Oh, but what a delightful experience to have when the enchantment works as planned.