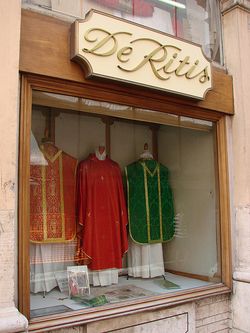 Recently, I went to a press screening of Angels & Demons, and spent most of the evening trying to identify various locations in Rome. Not the obvious ones, like St. Peter's and the Pantheon, but the rather more obscure places.  I was thrilled to catch a quick glimpse of one of my favorite shops, De Ritis, on the via de Cestari. If you want nice grey cardigan, as worn by nuns, this is the place.

Of course, the really posh ecclesiastics like to shop across the street at Gammarelli, the Papal tailors since 1798. If you're not expecting election soon, you can always buy the red knee length socks--the same as worn by the Cardinals. The other Cardinals, not the World Series ones.

There are other clerical outfitters in Rome, each with their own clientele. Sorgente is rather more modern than some others, with a minimalist look, and they donate to charity.

Barbiconi, despite a rather frustrating website, also supplies several orders of knighthood, including the

I'm guessing that last one is a typo for the Sacred Military Constantinians, but who knows?

Cardinals and bishops who like to shop close to work frequent Euroclero, but's rather downmarket. Tridentium offers the most complete online shopping--where else can you get something as wonderful as a regulation red hat? 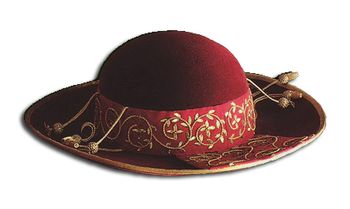