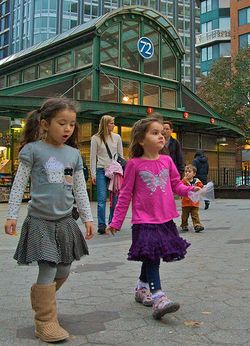 As I was headed to a going-out-of-business sale at the Border’s Bookstore in Santa Fe, I saw something that probably happens millions of times a day around the world. An older sibling was trying hard not to appear connected to a younger. In the photo shown at left, two sisters are distancing themselves from their parents and younger brother behind them. And, sadly, at some point in her teen years, the older sister will protest if told she needs to let her sister tag along.

In Santa Fe I saw a nattily dressed boy of about seventeen purposely walking very fast, forcing his younger sister to periodically have to run or skip to catch up. He was trim, attractive, and had impeccably styled hair. He was wearing a nice sport coat with a well-matched shirt and tie, nice trousers, and well-polished dress shoes. He perhaps looked a bit preppy for the bookstore, but there was no question he looked  confident and sharp.

His younger sister was about thirteen or fourteen, and I could see why he was trying to ditch her. She was pudgy, her hair was a mess, and her unattractive pink dress fit horribly. She had put on a long-sleeved t-shirt under the dress for warmth, and this make her outfit look even worse.

While he looked sophisticated, she looked clueless. Once in the bookstore, they separated, and I never saw him go anywhere near her the whole time I was there.

I told this story at a dinner gathering the other night, and many people starting talking about their relationships with their siblings. One woman’s younger brother (by two years) used to like to hang out with her girl friends when they came over, and she was not happy that her friends found him so funny that they liked having him around. Although she had a good relationship with him, she reached her limit when he tried to join them at their lunch table at high school. After all, she laughingly recalled , “I was a senior!”

No matter how close we might usually be to our siblings, there are times when they can interfere with the image we are trying to project, especially in the strange peer-pressure world of junior high and high school.

[Photo "Hey, Alice, I've been thinking: we're old enough to go out on our own now, without Mom and Dad and our younger brother tagging along and slowing us down" by Ed Yourdon. Used under the Flickr Creative Commons license.]