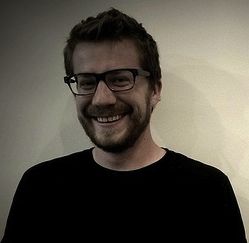 Domed cities, disposable clothes, fashion wired for sound, robot servants, electronic shopping, and, of course,flying cars. Since 2007, Matt Novak's PaleoFuture blog (now supplemented with a popular Twitter feed) has been sharing such past visions of the oh-so-glamorous future, as depicted in old newspaper articles, ads, illustrations, and world's fairs. Here, he shares some thoughts about futurism and nostalgia, along with some favorite images.

DG: How would you describe PaleoFuture—the site and the concept—to someone who'd never seen it?

Matt Novak: The PaleoFuture blog looks at past visions of the future, primarily focusing on 20th century predictions of the American future. Paleofuturism, or more commonly retrofuturism, looks at the predictions of scientists, advertisers, designers, and average people to see what those predictions say about the time in which they were created and how they may have shaped our current times.

DG: How did PaleoFuture come to be?

MN: In 2007 I was taking a writing class that included starting a blog. While most people in the class started blogs about their personal lives I decided that I wasn't very interesting and would write about something else. I started to explore this idea that I had been thinking about since I was a child: how people of the past imagined the future. 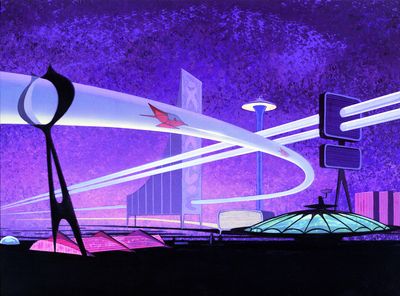 DG: What used to be glamorous about the future?

MN: Images of the future are reflections of the time in which they are created. The future was most glamorous at times when this abstract idea of glamour was important to popular culture. The 1950s is considered a golden age of American futurism. The 1950s techno-utopian ideas of progress sometimes appear to be reconciling the shiny plastic future alongside the more traditional ideas of glamour and the American dream.

DG: What are your favorite PaleoFuture images? 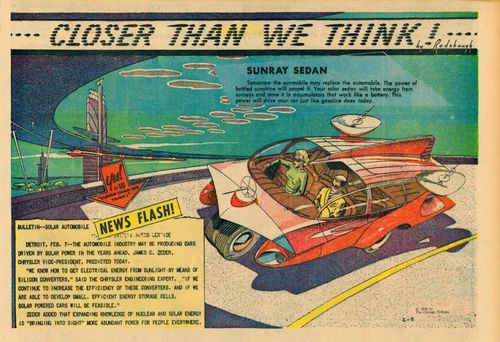 Closer than You Think (1958): Solar-Powered Cars

MN: My favorite images of retrofuturism often come from a Sunday comic that was syndicated by the Chicago Tribune from 1958 until 1963. [More examples here, here, and here.]

DG: You recently wrote on your Twitter feed that "Nostalgia is not a disease, but a symptom of fear." How do you define nostalgia? Do you have to have experienced something yourself to be nostalgic for it? 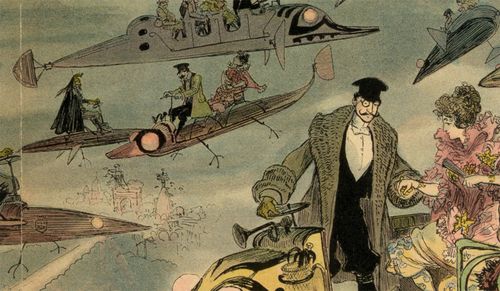 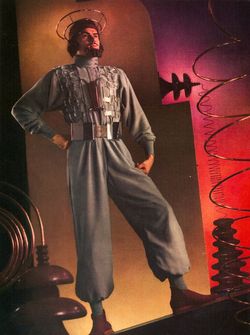 DG: Is PaleoFuture a nostalgic site? If not, why not?

MN: I do my best to present PaleoFuture as neutrally as possible, though my personal opinions on society, technology, or progress often bleed through. I think many people who visit my site find it to be nostalgic because they're projecting. People often think that even the future used to be better.

DG: You often post mysterious requests on your Twitter feed—advice on finding a book on theme park design or an old robot or jet pack in Los Angeles. What do you do when you're not blogging?

MN: I work for a non-traditional marketing company in Minneapolis called Street Factory Media. We do stuff like this (and by "like this" I mean I cast and managed that stunt). I'm moving to Los Angeles in September and will be working for the same company.

DG: What do you think of the upcoming Tron movie?

MN: Haven't seen it obviously but I'm excited to check it out. I'm generally fine with movie remakes, sequels and prequels. I'm much more of a cinelibertarian than most of my other film nerd friends.

DG: Is there anything glamorous about the future nowadays?

MN: This question is the most clever attempt at making me predict the future that I've seen. But, no dice. I don't know the future and the beautiful thing is that no one else does either.

Poise and grace. Confidence is the most essential ingredient to glamor.

A snifter of brandy

The sound of breaking glass

Yes. It's just cyclical as to whether it's in style or not.

The larger question is whether you're born with confidence or not.