DG Interview With Carol Alt: "The Moment You Walk Out Into The Public You Have An Image." 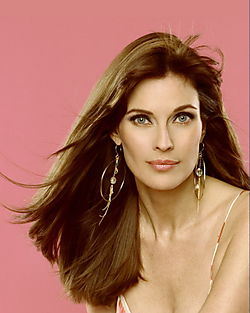 In her new novel, This Year's Model ’80s supermodel Carol Alt tells the story of a nice Jersey girl named Melody Ann who is waiting tables and planning for college one day and modeling for magazine spreads the next. It's a story not unlike Alt’s own, but updated to the era--and for the audience--of America’s Next Top Model. Alt will be signing books tomorrow evening, Thursday, September 25, at 7:00 at the Westwood Borders and will be appearing at the West Hollywood Book Fair on Sunday. DG caught up with her by phone Wednesday morning, as she started a busy day in L.A.

Q: Writing a novel is a big change from writing about raw foods [the subject of Alt's previous books]. How did this come about?

A: Two things happened more or less simultaneously. My agent Laura Dail came to me and said, “Whenever I sit with you, whenever we talk, you tell the funniest stories, you have me rolling in the aisles. You should really write a book.”

Then I was sitting with an agent friend of mine and he said, “Carol, you can’t believe what’s happening in the industry. The girls come in, they maybe last one seasons. They’ll do some shows, they’ll make a little money, and then they’re gone.”

I said, “What has changed so drastically? My career has lasted 30 years. What could happen to cut a career down from the possibility of 30 years to one season?”

He said, “They don’t have any history, they don’t have any connection to the business, they don’t know of any girls who came before. They have no role models. They have no business models. They come in and they think if they sleep around, if they do a lot of drugs, if they party a lot, if they’re out and people see them, they’ll get jobs faster than the agents they’re signed to. They burn out really quickly, they look bad fast, and they’re used up.” 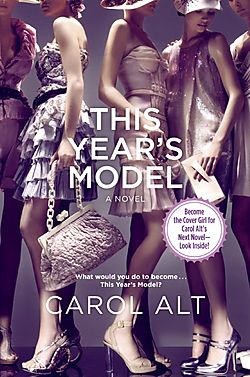 These girls are reading magazine articles that make it look like all the girls who made it to the top are huge partiers, did a lot of drugs. All these mothers, all these girls, they stop me on the street. I can’t tell you how many people give me their resumes: "Can you please give this to your agent? Can you help us?" They have no clue how to go about this business. I thought, It’s time for a book that’s speaking to these girls. It’s not my finger wagging at them. It’s in a voice that’s young and hip. I wrote about what I knew about the modeling industry from my career and updated it to today, made it more relevant.

Q: You’re running a cover-girl contest for your second novel. What is the second book about?

A: The second book is still the same character. We’re following her. You see this character moving on and becoming a force in the business.

A career has stages. When I was starting out, I’d go to a photographer who wasn’t well known, or I’d get a catalog job. Then all of a sudden you’re working for a bigger name. Or with catalogs, you go from Spiegels or Butterick to Lord & Taylor or Bloomingdale’s. As this is happening, your agent is going, “Oh my God, you got a job with Bloomingdale’s!”

I remember this girl I worked with at some low-end catalog place said, “We’re friends and we hang out, but ultimately you’ll move on. Your agents won’t let us work together by next year.” I said, “No, I’ll make them let us work together.” I was naïve enough to think I’m making a client. The agency had other plans, which were to move me on to other jobs to build my popularity and desirability in the market. The agent is telling you that: “Oh my God, you got Versace! Vogue just booked you!” It’s not Mademoiselle--for me it was Mademoiselle, today it would be it’s not Glamour, it’s not teen books, it’s Vogue. You as a character are moving forward. Then comes a point where you’re no longer a new face.

The one thing in this business that I can’t stress enough is that you never really feel successful. You are every day needing to get a job. It’s not like you get this fabulous job and it’s going to carry you through for the next ten years. That job lasts three days, and you still need to get your next job. Because if you don’t have your next job, you’re forgotten about almost immediately--back then, and now. There’s this constant need to always work.

Q: You have a passage where your protagonist “officially retires” Melody Ann Croft and says, “I am Mac, even after hours.” Is a model ever off stage?

A: No. And that’s exactly what happened to me. I used to say I’m Carol with the big C when I’m out on the stage and I’m carol with the little c in my life. I would walk around in sweatpants on my way to the studio, with hats and glasses on, and then I’d get to the studio and all of a sudden you have this makeup and hair and the fans blowing and the photographers and the music going and you’re a whole ’nother person.

"If you’ve got a giant pimple on your face, you can’t go out, because if people see you and you do not look good, that’s all they say: ‘Oh, I saw her. She does not look good.’ Two days later you look fabulous again. But they just remember you did not look good."

When you’re out, a photographer might see you. So you need to look good. If you’ve got a giant pimple on your face, you can’t go out, because if people see you and you do not look good, that’s all they say: ‘Oh, I saw her. She does not look good.’ It can’t be that you had a bad night’s sleep or you had the flu that day and a hangover and a broken toe and your hairdresser messed up. Two days later you look fabulous again. But they just remember you did not look good.

Q: How do you create a safe haven for yourself, where you don’t feel like you’re on stage?

A: When I was modeling, I didn’t have that. It was just airplanes and studios. When I started doing movies it was a little easier, because you’d go away on location. You’d go from the hotel to the car, and the car to the set, and you had security and body guards, and nobody could get near you. But as a model, you’re really just out there. They can find you anywhere. We’re in airports, we’re in drug stores, we’re in Whole Foods. And photographers are very opportunistic.

I was walking on the street last week going to a photographer’s studio to look at some photos that were shot for a layout that’s coming out in December, and these guys from TMZ caught me. They were stalking the photographer’s studio to see what famous people were coming in and out. They were following me with their cameras down the streets, and I was in sweatpants. I said to my girlfriend, “Do me a favor and stand in front of me.”

It’s not that I was trying to be rude, but you spend millions of dollars in the course of a career on publicity and imagery and stylists and hair and makeup and clothing and shoes--all the right things at all the right times. But after a while, it was clear that I wasn’t going to be able to block these guys. I was out in my sweatpants being photographed. And they were shouting to me, “Carol, you did great on The Apprentice! You look fabulous!” In my sweatpants. Come on, guys, have a heart.

DG: Thank you very much.

Posted by Virginia Postrel on September 24, 2008 in Fashion, Books, Interviews