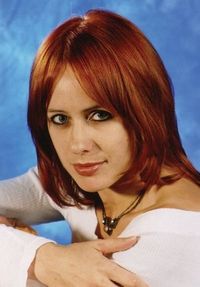 After a childhood of ballet, tap, and jazz dance lessons, Juliet McMains was mesmerized the first time she attended a professional ballroom-dance exhibition. "There must have been a man in the partnership, but I only remember the woman," she writes in her 2006 book, Glamour Addiction: Inside the American Ballroom Dance Industry

. "She was unbearably sexy and sophisticated, and I made up my mind right then and there to become the heroine I imagined her to be." McMains had discovered the glamour to which she soon became addicted, a "perpetual longing" for the perfection she glimpsed in that dance.

I suppose my initial fascination with ballroom dance sprang largely from the romance it portrayed, its impossible promise of happiness and acceptance, the assurance that every woman would be accessorized with an adoring male partner, the clothes that signified such elegance and classiness, the inflated importance of each motion of an arm or an eyebrow—in short, the Glamour of it all.

As a Harvard undergraduate, Juliet did, in fact, become a successful competitive dancer—not the typical Cambridge extracurricular activity. She eventually turned pro, teaching in studios in Boston, California, and Florida, and winning championships in the U.S. and Canada before retiring in 2003, the year she received her Ph.D. in dance history and theory from the University of California-Riverside. She now teaches at the University of Washington. As both a scholar and a participant, she agreed to share some of her insights into the allure of DanceSport, the world of competitive ballroom dancing.

JM: The show’s portrayal of personal transformation through hard work and perseverance in the face of physical and emotional adversity is pretty seductive. I don’t think the show would work without all the shots of contestants struggling, falling, and crying in rehearsal. Seeing celebrities, who are usually portrayed in some idealized state, at their most vulnerable is perhaps the most important aspect of the formula. I also think the wide variety of contestants ensures that viewers of any background can relate to someone. The balance of different ages, races, professions, body types, and social backgrounds is quite clever in this regard. I also think the wide range of contestants’ natural dance abilities is pretty important. Each season, there is at least someone who is so awkward that living room viewers can be assured that they could do better than him or her. So fans can relate not only to the contestants, but they can becomes judges themselves. And of course the glamorous costumes and bodies are essential.

I think it portrays ballroom dance with a touch of irony and less seriousness than the ballroom dance industry takes itself. I think this is a healthy thing. Ironically, because they take themselves less seriously, they have managed to make ballroom dancing much more important to the general American public than the ballroom industry has ever done. It’s not mastery over the “right way” to dance that makes dancing powerful. Its power is in its ability to transform people as they get in touch with their own bodies.

My big complaint about the show is the music they choose for the Latin dances. It’s almost never Latin music and completely unrelated to the genre of dance they’re supposedly portraying. Latin dances are defined by their relationship to a particular style of music, so to extract the steps from the music/dance complex and call these Latin dances is a gross misrepresentation of Latin dance. 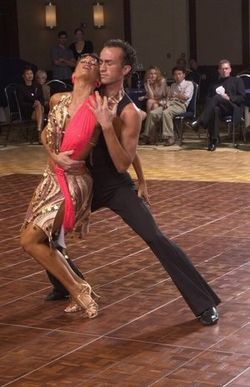 DG: In your book, you write about how your partner in Florida designed and made some "amazing dresses" for you. But, you say, "It was never as much fun being in the dress as it was imagining being in the dress, touching it from afar." What did you picture from afar? What did the dresses represent in your imagination?

JM: To me, the dresses represented perfect mastery of the technique, a perfectly disciplined body. I’m sure there was some conflation of that perfect body with fulfillment of emotional needs. If my body had achieved perfect mastery over movement, any feelings of inadequacy would vanish, my desire would be fulfilled, and I would be blissfully happy. It seems so naïve, but I suspect we’re all susceptible to similar fantasies.

DG: You point out several times that DanceSport has no backstage. How does that affect how participants and observers perceive the performances? Can a dance ever seem truly graceful and ideal if you see the dancers "off stage" before and afterwards?

JM: But the catch is that the professional dancers are never “off stage.” They know that they must always perform their glamorous identity even when they are not dancing. This is why I think that DanceSport’s Glamour Machine is particularly pernicious. Professionals loose touch with any experience of themselves other than the Glamorous ideal they’ve learned to perform.

DG: You're both a scholar/analyst of dance and a teacher/participant. How do those roles conflict? How do they complement each other?

JM: They conflict in that I really couldn’t continue to participate as a competitor in the DanceSport system once I had come to these conclusions. As a teacher, it means that I also have a hard time encouraging my students to compete if I think it’s going to be unhealthy for them. But I still continue to teaching ballroom dancing, and I do think there are ways to participate in competitions that are healthier than what I’ve described in my book, so I do hope that my experience can help others find a different way to interact with the system. 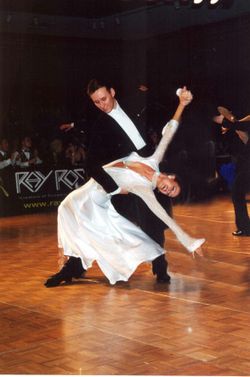 DG: To an outsider, especially a pale outsider like me, one of the strangest conventions of dance competitions is the spray tan. What is that all about?

JM: Participants will tell you it’s just makeup to make pale skin look better under stage lights. But I think there are many other levels. Many Americans and Europeans have internalized the idea that tanned white skin is more beautiful than pale skin, which is linked to the fact that most people work now indoors and do not have the leisure time and money to sun themselves outside. But I think the racial dimension is more troubling. When I’ve written about this practice, I’ve called it “brownface,” comparing it to blackface minstrelsy. Both are theatrical traditions in which performers paint their skin darker to perform stereotyped caricatures of a racial or ethnic group that has less power than the performers themselves. White competitors are putting on brownface to compete in Latin dances where they perform stereotypes of oversexed, overemotional Latinos. The ballroom Latin dances are not actually dances that are practiced in Latin America, but are American and European reinterpretations of them. So it’s not just the tan I’m worried about, but this history of appropriation and perpetuation of harmful stereotypes that it’s tied up in.

DG: You write that "The power of Glamour," by which you mean the "Glamour system" of DanceSport, "is located in its ability to suspend consumers in a state of perpetual longing, intensifying their desire by dangling symbols of its fulfillment within sight while simultaneously preventing its ultimate satisfaction." What are people longing for? What are those symbols?

JM: I think what people are really after are basic human emotional needs like love, recognition, validation, acceptance, and companionship. Almost any commodity can be associated with one of those needs so that students believe if they buy a dress or more dance lessons or a competition or the right dance shoes those needs will be fulfilled. It’s the basic premise of advertising, really. I just think it’s intensified by the DanceSport system. One of my students told me that she’s learned this same principle in her marketing classes. “Imagine how much more successful your marketing campaign could be if you spent hours in the arms of your customers,” I told her.

Posted by Virginia Postrel on May 12, 2009 in Interviews, Dance, Glamour Defined