Cuteness And Glamour: Can They Coexist?

Last week, I attended the Princeton conference "Too Cute: American Style and the New Asian Cool" and gave a brief, informal talk about glamour and cuteness. The two rarely coexist, since they entail contradictory qualities. Mix them, and the cuteness tends to win out, canceling out the glamour altogether or producing something disturbing or comical. 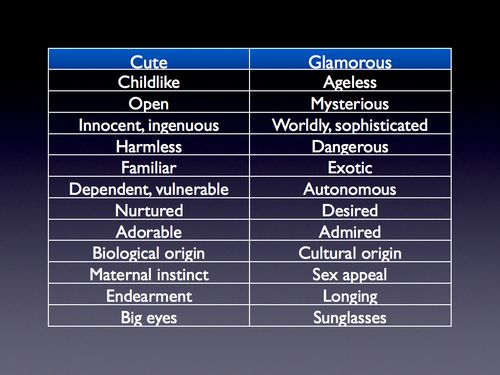 In preparing for the conference, I did find a possible exception to this rule, the big-eyed doll called Blythe. An adult-targeted recreation of a doll produced for one year in the early 1970s, Blythe is endlessly customizable. Out of the box, you can change her eye color by pulling a string on her back. You can change her face, her hair, her body, and, of course, her clothes. All of the Blythe dolls below started as the same model.

I took this picture (actually three different pictures) in the studio of photographer and video producer Gina Garan, who rescued Blythe from obscurity, giving her a starring role in a 1999 TV commercial for a Japanese department store and publishing a book of photos, This is Blythe

in 2000. Gina's then-agent, Junko Wong, brought Blythe back into production, licensing Asian rights from Hasbro. Today, there is a worldwide network of Blythe fanatics, including many people outside Asia who must rely on secondary markets like eBay to buy the dolls.

Like Gina, many Blythe collectors enjoy photographing their dolls, often posing them in scenic real-world environments. Though Blythe has the classic big eyes of a "cute" figure and is often photographed accordingly, she sometimes takes on glamorous personas. Here are three such renditions: Blythe planning a heist, Blythe as a glamorous seaside celebrity, and Blythe on a glider wearing aviator goggles. 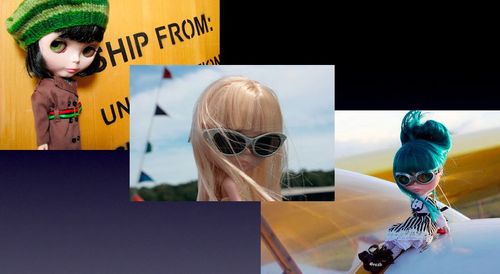 Although the dolls are still cute, they manage to pull off glamour without falling into either comedy or weirdness. In part this is because the adults who collect and photograph them treat them as alter egos, not children. In part it is because Blythe is shown as active and adventurous, rather than dependent and vulnerable. And in part it's because glamorous Blythe tends to look to the side or wear shades, giving those giant eyes an essential element of mystery. [She plans the heist! by Flickr user Sugaroni, Celebrity Sighting!!! by Flickr user The Dolly Mama, We'll go flying so high! by Flickr user rockymountainroz, all used with permission.]

Posted by Virginia Postrel on March 07, 2010 in Glamour Defined, Dolls