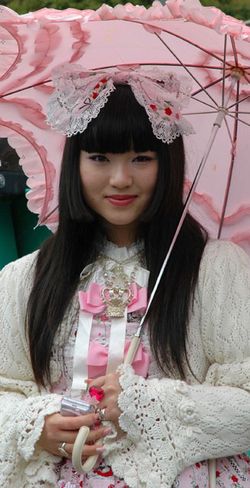 This Japanese vision in pink and white is engaged in cosplay (costume play) in Tokyo near Harajuku station. Virginia wrote about cosplay and the glamour of dressing up in July. In Tokyo many girls and young women engage in cosplay on Sundays, and are happy to pose for photographs. This Little Bo Peep costume has some interesting details: she is wearing a crown necklace and a giant costume jewelry ring. This has historical implications because Western royalty also used to masquerade. She is referencing not just a nursery rhyme, but also the history of costume play.

One of the most famous costume players was Marie Antoinette, whose husband Louis XVI gave her a fake hamlet called Hameau de la Reine within the park of Versailles. There Marie gained a fantasy setting for her costume play, complete with docile, well-cleaned livestock, and porcelain milk pails. Here the Queen and her attendants could play at being elaborately dressed shepherdesses and milkmaids.

In 18th-century England nobles loved to attend balls masquerading as sumptuously costumed rural characters. Anti-masquerade clergymen felt that no moral woman should attend one. Nonetheless, the masquerades became so popular that conservatives warned that suggesting that the difference between nobles and peasants was a matter of appearance was a danger to the established social order. As Terry Castle writes in Masquerade and Civilization: The Carnivalesque in Eighteenth-Century English Culture and Fiction

The anti-masquerade rhetoric of the period offered a clue to the masquerade’s ultimate demise when it exposed the masquerade as a threat to bourgeois decorum and rationalist taxonomies. Mask and costume, the signs of a joyful exchange between self and other, had to be laid aside, and more sober pursuits embraced. 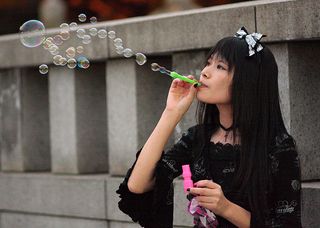 In Japan another popular cosplay character is Lolita, and she is often costumed in Goth black. The young woman shown here blowing bubbles evokes both childhood innocence and a seductive nymphet. The bow on her head seems girlish, but the Goth clothing and the black-cross necklace seem more witch-like. Perhaps the iridescent bubbles she is conjuring are charmed, and have the power to bewitch.

Nabokov’s novel provides no more basis that Lolita should wear black than the nursery rhyme does that Little Bo Peep would dress in pinks and whites. And, clearly, no real-life shepherdess wore fancy clothes while tramping about with her sheep. But this is costume play, and so it is rightfully playful. 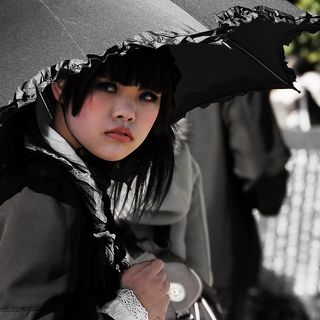 The cosplay characters sometimes overlap. A parasol is usually part of the Little Bo Peep costume, but this young woman glancing back from beneath her black parasol suggests a combination of shepherdess, Goth, and Lolita. Her features are still somewhat child-like, but the costume and makeup are grown up and provocative. This unexpected mixture is part of the charm of the costume, and, with her appraising gaze, this Little Bo Peep/Lolita looks dangerously sexually precocious.

These elaborate costumes involve significant expenditures of time and money. And, as all of these photos show, these young women act the roles they are portraying. As Virginia has written, the chance to participate in cosplay, to be noticed, to stand out, and to be photographed is a social activity these young ladies find richly rewarding.

I imagine that these young women gain poise from cosplay that carries over into their everyday lives. Playing someone other than themselves may genuinely expand their sense of self. Terry Castle wrote that the 18th-century masquerades were “a profound mingling of opposites, an absorptive, endlessly satisfying embrace of self and other.”

Posted by Randall Shinn on October 15, 2009 in Fashion, Escape, Appearance