This week's Fashion Show challenged contestants to design an outfit based on the work of one of eight fashion icons: Coco Chanel, Christian Dior, Gianni Versace, Madame Grès, Emilio Pucci, Halston, or Yves Saint-Laurent. It was surprising to see how little fashion history many of these designers have absorbed, since a little web surfing or the occasional visit to a museum or bookstore is enough to give you a basic education—no formal schooling required. The episode also demonstrated how much the show could be improved by a tie-in with FIT (a rival to Project Runway’s Parsons or FIDM), especially its outstanding museum. It would be great to see the brainy Valerie Steele replace deadwood host Kelly Rowland.

The contestants who wound up in the bottom two, Haven and Reco, were assigned Yves Saint Laurent and Halston, respectively. Although Haven professed a great admiration for YSL’s work, she failed to capture its feel, while Reco knew nothing about Halston. Unfortunately, as judge Fern Mallis noted on her blog, the samples provided by the vintage shop—just one per design icon—"were not in all instances great representations of those iconic designers' most important or influential looks." Better than a poor vintage selection would have been a tour of the Met’s current Model as Muse exhibit (see earlier post here). Haven and Reco in particular might have learned from this recreation of a Studio 54-era “VIP Room.” 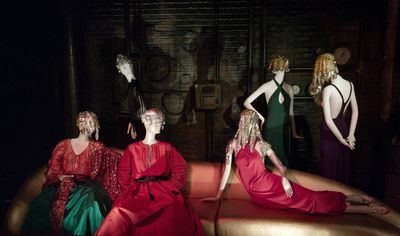 In the Either/Or section of DG Q&A interviews, we ask, “Armani or Versace?” In the 1990s, those two designers represented contrasting aesthetics, both associated with but not the same as glamour: the elegant, understated luxury of Giorgio Armani (who, unlike Fashion Show's icons, is still living) and the flash and sexuality of Gianni Versace. Each is glamorous in the eyes of some audiences, not so to others. The Met’s ’70s tableau offers another contrasting choice: Yves Saint Laurent or Halston. It’s a great demonstration that glamour can take many different stylistic forms, even in the same historical context. (The tableau also reminds people like me, who tend to think of ’70s fashion as a glamour-free zone, that those who associate the decade with glamour aren’t entirely nuts.)

Here we see two contrasting, but equally glamorous, visions, both offering escape and transformation. YSL’s plays with exoticism, ornamentation, and idealized peasant forms—mythical historicism. Halston, by contrast, promises to make the wearer streamlined and modern. Both aim at seduction, YSL with flowing fabrics that brush the body but don’t display it, Halston with elegant but body-conscious fit. In keeping with the times, both styles appear to require few undergarments and permit easy removal. (The bizarre head gear is part of the museum display.)