The Glamour Of Cars And Fashion: Embodying Escape And Transformation 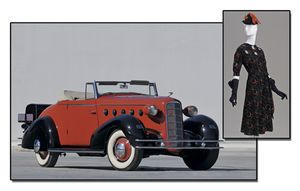 In the introduction to her essay collection, A Dedicated Follower of Fashion

, fashion critic Holly Brubach makes a case for the cultural significance of fashion. It is, she suggests, “architecture’s feminine counterpart....Buildings and clothes are the primary components of our everyday landscape, and they embody the ideas and the attitudes of the time in which we live.”

While I agree with her about fashion’s significance, I’m not convinced that buildings are clothing’s masculine counterpart. They are too static, too permanent, and too communal. Architecture operates differently on the imagination. It tends to be more evocative in photographs than in person, while clothes are just the opposite.

Fashion’s real masculine counterpart is personal transportation, which since the early 20th century means cars. (It once meant coaches, as time spent with Madame Bovary or Sherlock Holmes will quickly demonstrate.) Like an outfit, an automobile wraps its owner in a new outer shell, both protective and decorative. Even the most ordinary car, like even the most ordinary clothes, thus holds some prospect of transformation while extraordinary cars, like extraordinary clothes, conjure up whole new lives. The glamour of both comes from the promise of escape and transformation. 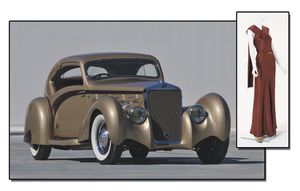 Both cars and clothes also express, as Brubach said of architecture, the ideas and attitudes of their time. Yet, outside of the movies, they are only rarely deliberately paired to call attention to these correspondences. People who think seriously about cars usually know little about fashion, and vice versa.

The photos here represent an exception: an exhibit, titled Automotivated: Streamlined Fashion and Automobiles, on display at the Petersen Automotive Museum in Los Angeles through January 23. A collaboration between the Petersen and my friend Dennita Sewell, the uber-talented fashion curator at the Phoenix Museum of Art, the show pairs such examples of 1930s styling as (top) the 1934 LaSalle Model 350 Convertible Coupe with a 1939 Hattie Carnegie dress whose pattern echoes the car's portholes and streamlining. (Dennita mounted a similar exhibit in Phoenix in 2007, complementing this extraordinary car exhibit.) 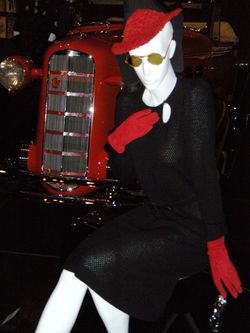 As the exhibit’s copy notes, in the streamline era the echoes were sometimes deliberate:

Wealthy connoisseurs would collaborate with French couturiers, automakers, and coachbuilders to create perfectly matching ensembles. Even Chanel met with exclusive coachbuilders like Joseph Figoni to formulate matching automobile and fashion ensembles for a select few clients. Well heeled patrons often had long lunches in exclusive hotel restaurants with their coachbuilders and couturiers to order coordinating fashion and automobile ensembles to be debuted at prestigious parties or high profile events such as a concours d’elegance.

There might have been other, less official wardrobe coordination. The second car pictured is a 1937 Delage D8-120. Louis Delage, the car company’s founder, contrasted his products with the competition. “Gentlemen drive Alfas, and you’re driven in a Rolls,” he said. “But a Delage is something to give one’s mistress,” perhaps along with a similarly streamlined bias-cut dress.