From The Archives: Capes On The Runway: Glamorous But Impractical?

With the WSJ reporting that fashion is having a "superhero moment," we revive this post, with minor tense changes, from a similar moment back in 2010.

Concealing the body and arms in a dramatic sweep of fabric, capes are among the most glamorous of garments. Yet they haven't been popular for quite some time. As Fashionising noted in a guide to the 2010 cape craze, "Since the humble poncho had its hippie revival, the cape in its more sophisticated forms has seen nothing of a major comeback on the streets--that is, until now." 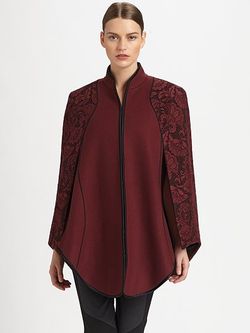 Perhaps that's because the cape's mystery and drama come at the price of practicality. Even most superheroes have abandoned them. "Capes have been an object of scorn among discerning superheroes at least since 1974," writes Michael Chabon, "when Captain America, having abandoned his old career in protest over Watergate, briefly took on the nom de guerre Nomad, dressed himself in a piratical ensemble of midnight blue and gold, and brought his first exploit as a stateless hero to an inglorious end by tripping over his own flowing cloak."

When I was just out of college and living in Philadelphia, my grandmother gave me a beige wool cape she'd bought for herself but found too heavy for Georgia. I thought it quite glamorous and happily substituted it for my rather boring winter coat.

There was just one problem. You can't carry a purse on the shoulder of a cape. It slides off. In fact, with your arms covered by the fabric and small slits for your hands, you can't carry much of anything at all, especially when commuting by bus. My solution was to put my purse, and anything else I needed to carry, under the cape, against my body. That worked, and it had an unexpected benefit.

For some reason, whenever I was standing up on the bus, people offered me a seat. It took three or four such incidents before I figured out that I looked pregnant.

Posted by Virginia Postrel on October 25, 2012 in Fashion