Editor's note: New contributor Dorian Electra is a student at Shimer College in Chicago, who is best known for the playful videos she produces and stars in, including her breakout viral hit, a love song to economist Friedrich Hayek.--VP 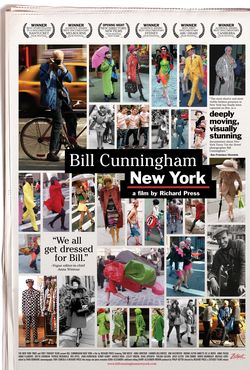 “He who seeks beauty shall find it” is the personal motto of 82-year old fashion photographer Bill Cunningham. He’s been riding around on his bicycle, photographing fashion on the streets of New York City for roughly half a century. And although his name and reputation are well established in the fashion world, his personal “fashion philosophy” is by no means conventional.

In the movie Bill Cunningham New York, Bill comes off as a mysteriously simple character, a happy man who loves what he does and does what he loves. But there’s more; in fact, there are many complex and profound ideas wrapped up in the way Bill views fashion and culture, all of which inform the pictures he takes.

When photographing runway shows in Paris, he says, “If it isn’t something a woman could wear, I’m not interested.” His down-to-earth, fun-loving attitude makes fashion approachable to all. He praises daring and originality in clothing choices above all. He’s not afraid to call an outfit boring, no matter who’s wearing it. He may ignore a celebrity on the street wearing a multi-thousand dollar gown in favor of a bag-lady digging in the garbage, whose overlapping patterned shawls and head-scarves he thinks are “marvelous.”

Bill Cunningham’s straightforwardness stems from his ethical commitment to honesty and to celebrating individual creativity. He takes a firm stance against fashion magazines’ “In & Out” lists for attempting to dictate from the top-down what’s “in fashion” and what isn’t. Part of his opposition is moral and the other part is practical. He understands that no matter what magazines and designers decree, real fashion—what is actually “in”—can only be determined from the bottom up, by what everyday people actually wear.

To me, it seems that Cunningham’s incredible ability to capture weekly street-style trends is made possible by his understanding of how culture works. Bill’s photographs show us that in the city, fashion is a silent dialogue between people on the streets. Some respond to the latest designs from Paris; others adopt and revise the looks of those around them, incorporating good ideas from anywhere they can be found. People’s clothing choices are also often responding to the conditions of the local climate and Bill traces these complex and spontaneous orders with skill and grace (see “Boiling Point,” documenting the woven, eyelet fabrics of the hot New York week of August 14, 2009).

In de-emphasizing the role of “top-down” dictates from the fashion elite, Bill Cunningham helps us see how we, as everyday people, have the opportunity to participate in the fashion world. “I’m not interested in celebrities with their free dresses,” he says, “I’m interested in clothes!” He calls our attention to the role each of us has as a potential contributor to the silent dialogue of fashion with the choices we make in front of our mirrors each morning.