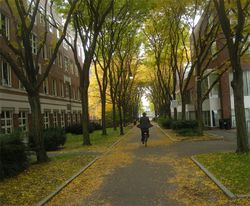 One of my most glamorous memories is of my book editor hopping on her bicycle to go back to the office after a lunch with me in New York. She was wearing a skirt and heels and looked utterly graceful and sophisticated as she rode away.

With their smooth, silent progress, bicycles have great potential for glamour. We use "like riding a bicycle" to mean a physical skill that has become second nature, unforgettable even after years of disuse. We don't say, for instance, "like brushing your teeth," equally second nature but much less impressive. A bicycle can't even stand upright without support, much less move forward.

Yet unlike a car--or, for that matter, a horse--a bicycle depends only on its rider for locomotion. It represents autonomy. In my childhood, getting a bike was the first step toward independence. You could now travel reasonable distances without your parents. 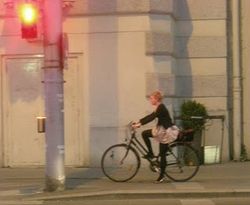 But bicycles aren't on most people's short list of glamorous objects. Competitive cycling, like marathon running, never looks effortless. Kids are burdened with bicycle helmets that make them look dorky and tell them cycling is dangerous. No wonder President Obama skipped the helmet at the beach in Hawaii, after drawing laughs for his helmeted bike ride during the campaign.

As cycling has become more and more an esoteric sport, with complicated gear and lingo, buying a bike has become off-putting to outsiders. When the design firm IDEO worked with component manufacturer Shimano to develop a new bicycle concept, the two firms found were surprised at non-cyclers' attitudes. They loved their memories of biking but were put off by the attitudes and complexity of cycling shops. As Bicycling magazine explained:

"When we asked if Lance Armstrong inspired them, people would say yes, but not to ride a bike," says Shimano's [U.S. marketing manager David] Lawrence. And while all the interview subjects had positive, almost reverential memories of childhood bike rides, Sklar noted that "their feelings about the reality of the biking world are remarkably different." Their dominant image of cycling was one of exercise, speed, uniforms and competition--not of play or fun. "There are a lot of people who feel intimidated and unwelcome in that environment," Sklar says. 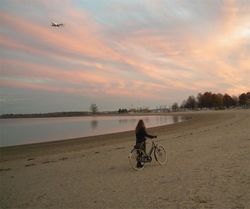 To teach cycling enthusiasts what it felt like to be a casual biker in one of their shops, IDEO made them shop for skin products at Sephora. As Daniel Gross recounts in Bicycling:

The Sephora staff, quickly sizing up the bike guys as outsiders and neophytes, treated them with disdain. Says Lawrence: "Everything that happened to noncyclists in a bike shop was happening to our guys in the cosmetics store."

That design collaboration produced a new category called "coasting bikes," designed for casual riders. Another concept, which incorporates more cycling glamour, is the "lovely bicycle," designed for daily, but noncompetitive, use. Here's a description of a lovely bicycle from the blog by that name:

When utility and romance coexist not despite, but because of one another, that is a Lovely Bicycle! A Lovely Bicycle does not only look beautiful in itself, but allows you to look your best while riding it.

Our notions of personal aesthetics vary, and, naturally, so will our bicycles. For the individual whose personal style consists of casual or athletic clothing, a roadbike can be a perfectly appropriate choice. For the individual whose style revolves around formal attire - including suits, skirts and high heels - an upright city bike works far better. The main idea, is that the bicycle should not require the cyclist to change their preferred way of dress or their lifestyle in order to ride it. 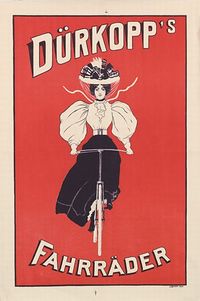 Recounting her yearning for a lovely bicycle untainted by the butt-up, head-down, Lycra-legged aesthetics of competitive cycling, blogger Filigree writes:

Only on vintage posters and in old art films did I see the romance that made me long for cycling again. Seeing these fictional lady cyclists of yore, the relaxed chic they exude is alluring and enticing. It makes cycling seem cool and fashionable. But can these associations exist in today's world?

They certainly do on her blog, from which these photos are taken. Although I'm a dedicated walker, she makes me want to get a bike—at least once the rain stops.

[Vintage poster from Swann Galleries and up for auction February 4.]