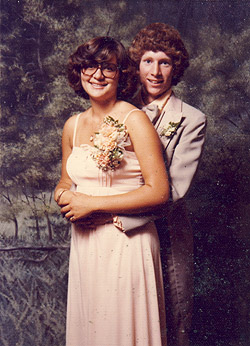 Randall's post about the aging motorcyclists raises an interesting question: What's the difference between being glamorous and feeling glamorous?

Since at least the 1930s, fashion magazines, cosmetics companies, and fashion houses have treated "glamour" as a style or product. "The gospel of Max Factor and [British makeup artists] the Westmores was that glamour could be achieved by any woman who put her mind to it," writes Carol Dyhouse in Glamour: Women, History, Feminism

, citing a magazine's 1939 on the makeover of a charlady. (She wiped off her new face and went back to her regular life.) A makeover or special outfit may make someone look attractive, and looking attractive may make her feel glamorous, but is that all there is to actually being glamorous?

, architectural historian Alice T. Friedman examines mid-century buildings that were designed to make their occupants feel glamorous by framing their lives--literally, with windows and other structural outlines--and giving them a feeling of processing through a special space. Eero Sarinen's TWA terminal, she writes, "offered travelers a vivid architectural experience, one in which ordinary people were given the opportunity not simply to arrive and depart in style but also to process and promenade, to sit, stand, dine, and observe one another in spaces of a ceremonial quality previously reserved for only the privileged few." The terminal was glamorous, but judging from the ordinary-looking crowd in the accompanying photo, I can't say the same about the passengers. Slumping in their swoopy modern seats, they look tired and a little schlubby, hardly up to crisp Mad Men standards. (You can see the photo at the end of this online excerpt from the book.) They don't make me yearn to join their special world.

Real glamour requires a receptive audience. You can only be glamorous if others perceive you that way. Feeling glamorous, on the other hand, means that your mental picture of yourself is one that you would find glamorous. You become the audience for your own glamour, creating a image of yourself that veils your flaws. Defying the ultimate intimacy, you somehow manage to turn yourself into an alluring Other. As for actual others, they may see something different.

Posted by Virginia Postrel on July 12, 2010 in Books, Architecture, Appearance