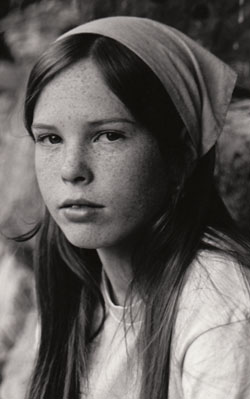 Personal glamour, especially in the sense of magic, makes little sense unless it is audience-aware, even if the audience is oneself. A woman might dress up to assure herself that she is attractive (a man might do the same), or put on nice clothes to brighten her mood. The notion of personal glamour suggests a person who is somewhat aware that he or she is seen as attractive and is (to some degree) comfortable with that.

. In the novel Stephen Dedalus searches for his calling, and vacillates between the priesthood and a career as a artist. He struggles with this intellectually, until, walking on the beach, he encounters mortal beauty and is overwhelmed.

A girl stood before him in midstream: alone and still, gazing out to sea. She seemed like one whom magic had changed into the likeness of a strange and beautiful seabird. Her long slender bare legs were delicate as a crane's and pure save where an emerald trail of seaweed had fashioned itself as a sign upon the flesh. Her thighs, fuller and soft-hued as ivory, were bared almost to the hips where the white fringes of her drawers were like featherings of soft white down. Her slate-blue skirts were kilted boldly about her waist and dovetailed behind her. Her bosom was as a bird's, soft and slight; slight and soft as the breast of some dark plumaged dove. But her long fair hair was girlish; and girlish and touched with the wonder of mortal beauty, her face.

She was alone and still, gazing out to sea; and when she felt his presence and the worship of his eyes her eyes turned to him in quiet sufferance of his gaze, without shame or wantonness. Long, long she suffered his gaze and then quietly withdrew her eyes from his and bent them towards the stream, gently stirring the water with her foot hither and thither. The first faint noise of gently moving water broke the silence, low and faint and whispering, faint as the bells of sleep; hither and thither, hither and thither: and a faint flame trembled on her cheek.

He turned away from her suddenly and set off across the strand. His cheeks were aflame; his body was aglow; his limbs were trembling. On and on and on and on he strode, far out over the sands, singing wildly to the sea, crying to greet the advent of the life that had cried to him.
Her image had passed into his soul for ever and no word had broken the holy silence of his ecstasy. Her eyes had called him and his soul had leaped at the call. To live, to err, to fall, to triumph, to recreate life out of life! A wild angel had appeared to him, the angel of mortal youth and beauty, an envoy from the fair courts of life, to throw open before him in an instant of ecstasy the gates of all the ways of error and glory. On and on and on and on!

The young girl’s reactions are crucial to Stephen’s experience. She has hiked up her skirts to stand barefoot in the stream, and then, sensing she has an audience, she turns her head. Stephan's ecstatic experience could never have happened if she had quickly turned away in embarrassment. Or if, unnerved by his enraptured gaze, she had begun to back away from him. Instead she looks at him and holds his gaze, tolerating him as he, awestruck, continues to absorb her mortal beauty.

Given her poise, surely this young girl has experienced worshipful gazes before. Perhaps her slender legs have been shaped by Irish folk dancing, and she is confident about her body and used to having an audience. Still, could she ever have imagined that at some unexpected moment, unplanned and transient, she would turn to find a young man gazing at her as if she were a young goddess risen from the sea?

Yet graciously she meets his gaze, captivates him, and then, by turning away, releases him. Surely, when she looks back to see him striding off in ecstatic joy, “singing wildly to the sea,” she knows her appearance has played its part in bewitching this strange young man. I suspect she smiles a little.

She has become, if she was not before, audience-aware. When she looks into her mirror that evening, she may see some reflection of the wonder she saw in that young man’s eyes.