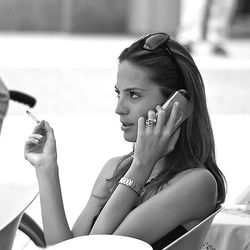 Randall's post below, “If Someone Glamorous Walked By, Would You Notice?” is about the things you miss when you’re on your cell phone. But the title made me wonder what the person walking by might look like.

When I searched Google images for “glamorous woman” and “walking,” I discovered a different connection between cell phones and glamour. The top three results were this stock photo, in which the woman is wearing sunglasses, the most classic glamorous accessory, while talking on a cell phone. (She’s also pushing a baby carriage, which may or may not be glamorous.)

Sunglasses, cigarettes, veils, hats, and fans are all classically glamorous accessories. All simultaneously attract attention and create distance. The audience gets an intriguing glimpse of the glamorous person, not a full view.

On a cell phone, the person is similarly present and distant, engaged with someone the viewer can neither see nor hear.  The phone adds an aural dimension to the visual mystery of  sunglasses. At the same time, like wearing jewelry or expensive clothes, talking on the phone signals status: Here is a person who is socially connected, who has friends, who is busy or important.

With cigarettes, veils, hats, and fans all more or less out of fashion, has the cell phone joined sunglasses as a glamorous essential?