In Japan, where schoolgirls spend long hours in their uniforms, there have been whole fashion styles based on school clothing. The single most provocative outfit that I have seen on an American university campus was worn by a young Japanese coed, her long hair tied innocently to each side of her head in ponytails. Her white shirt bared her midriff, and was tied in front so as to reveal a vivid red bra. Her pleated plaid skirt was very short and slung so low on her hips so that a matching red thong was revealed above her skirt in front and back. Knee-high white socks and platform high heels completed the look, one  guaranteed to capture the attention of every male she encountered. (This interesting post warns other Japanese girls that wearing Japanese “schoolgirl” styles such garu and kogal, which are considered provocative but acceptable in Japan, can cause you to be mistaken for a prostitute in other countries, such as the United States.) 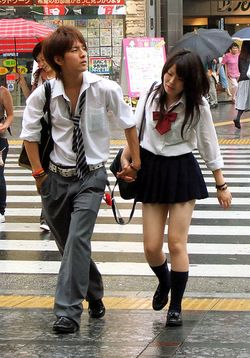 The couple pictured at left prove that even basic school uniforms can be made glamorous: notice the accessories, her skirt length, his pants cut, the stylish haircuts, loosened ties, and rolled up sleeves. Perhaps most humans have some innate desire to adorn themselves. If so, the patriarchal founders of austere religions may have correctly assumed that they could only suppress the desire of attractive women to display themselves proudly and advantageously if they could somehow convince them that doing so offended some kind of higher spiritual order.

That concept is certainly going to be a tough sell in modern urban centers like Tokyo. Not surprisingly, many of the suppliers listed in the Modest Clothing Directory are family businesses in rural communities. And here the title of the 1919 World-War-I song comes to mind: “How 'Ya Gonna Keep 'Em Down on the Farm (After They've Seen Paree?).” Unless you partially shelter young women from contact with urban centers and modern media (or else deny them a choice of clothing), few young women are likely to choose prairie dresses or burqas over some form of more up-to-date apparel, even if they live in a small town. Yet, paradoxically, if you do need a prairie dress (even if just so your daughter can play Little House on the Prairie), the oh-so-modern internet allows you to find places like Our Grandma’s Closet, where a retired grandmother offers custom-made prairie dresses and donates her profits to charity.

["The Eyes Can See" by Tinou Bao, photostream here, under the Flickr Creative Common License. Young Japanese couple © glassbubblegum and used by permission. Her Flickr photostream is here.]

Posted by Randall Shinn on June 21, 2009 in Fashion, Religion