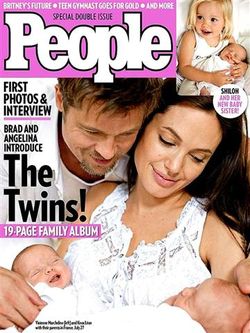 Angelina Jolie continues to confound. In a NY Times piece by Brooks Barnes, we learn that she can make some magazine editors jump through hoops,  write big checks for exclusive photos of her and her family, and to not use Brangelina when referring to her and her husband, Brad Pitt. I hope you're all sitting down when you read the whole story. Breathless quotes abound:

Fuller knows scary like the back of her hand, but smart? Let's ponder the impossibility of that, shall we?

Ms. Jolie expertly walks a line between known entity and complete mystery, cultivates relationships with friendly reporters and even sets up her own photo shoots for the paparazzi.

And as both the paparazzi and their customers make money off those photos,  she's been very savvy about making sure she or her favorite charities get paid.

And with the kind of keen insight that gets you a job at the nation's most important paper, Barnes surmises:

The persona that Ms. Jolie projects on screen tends to be intimidating and physical. She is not the girl next door.

No shit, Sherlock, as the kids say. Or used to say.

Jolie either grew up or remade her image, after her divorce from Billy Bob Thornton, depending on your POV. Writing about her meeting with Kashmir earthquake victims,  Barnes tosses in a quote from ancient flack, Michael Levine, who was probably the only person around willing to give a mean-spirited statement:

“Presto, they come out looking like serious people who have transformed a silly press obsession into a sincere attempt to help the needy,”

Except for those needy publicists and PR firms--does she think about them? Does she?

With a Q score of 24 ( a likeability scale), Jolie is a popular movie star. Want proof? This piece is the most-emailed story in the Business section (but only 17th  in the whole paper.)  Readers vary in their opinions of Jolie, but most agree that this piece was feeble.

Slideshow from an earlier story here.

Posted by KateC on November 21, 2008 in Film, Current Affairs