And The Message Is? 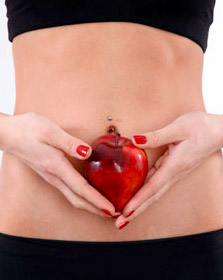 What’s the first thing that pops into your mind when you look at this image?

I suspect that the ad agency mostly intended it to suggest a heart, given that Valentine’s Day is this weekend. But when I saw the placement of the apple and the model’s hands, my first impression was far more sexual. (Have I read too much about Georgia O’Keefe’s use of flowers and skulls to represent sexual organs?) I might suspect my first impression was an example of a male’s one-track mind, but when it showed it to my wife (an artist), she saw the same thing, as well as blood.

The use of an apple to help create the shape could easily be read as a reference to Eve’s apple, and this model’s abdomen is definitely sexually appealing, right down to the pierced navel.

This image comes from an e-mail from Gaiam Live, and the headline reads, “The AB-solute best diet to flatten your abs.” Right. Surely some of the ad people saw that this image suggests more potential readings than just apples and abs. As the adage goes, “Sex sells.”

Posted by Randall Shinn on February 11, 2010 in Advertising, Sex