Of Voices, Performances, And Divas

The gods of singing are capricious. Some of us are given passable voices, others pathetic voices. Some are given good voices, and a few are given extraordinary voices. Some of these few have the power to enchant.

Most of the singing we hear today uses electronic amplification. Some singers have learned to take advantage of this, and sometimes use their voices in ways that seem remarkably intimate.

Here’s a video of Alison Krauss

using her beautiful voice in this way while performing on a TV show. At times she seems to sing so softly we almost feel we are overhearing her sing to herself. The male members of the group sometimes join her by singing softly into their microphones, gently supporting her. Everything about the group’s performance, including the clothing, suggests casualness, as if they look and sound much the same as they would if we happened to find them singing in someone’s home. (Nonetheless, I find Krauss’ lovely voice and quiet beauty enchanting.)

In contrast to this feeling of intimacy, operas are performed in large theaters, and the singers perform without amplification. Voices large enough to full such spaces are rare, typically need years of training, and can be damaged by singing roles unsuited to their voice and experience. Such rigorously trained voices help opera singers portray larger-than-life characters, and the quality of the voice is integral to those characterizations. Words such as powerful, vibrant, agile, and flexible are sometimes used to describe them--terms we associate with health and vigor. In a confined rehearsal space I once heard two baritones rehearse powerful, macho-tinged arias. A soprano then joked she needed to leave the room because there was too much testosterone in the air.

Given the gods’ capricious nature, large, beautiful voices doesn’t always in up in a bodies as appealing to the eye as the voices are to the ear. Opera fans have often overlooked this issue, but in our media-minded age, appearance has become more of a factor.

Listen to gorgeous, sumptuously voiced Anna Nebretko sing an aria from Puccini’s Gianni Schicchi for a TV audience. In this aria the singer tells her father that if he doesn’t help her marry the man she loves, she will jump off the Ponte Vecchio into the Arno River. In singing it she sounds as if she is pleading her case to the whole world—she is singing as she would (without amplification) to move a patron sitting in the last row of a theater.

Since this performance was not in a theater, a microphone was placed on the floor in front of her, and the reverberation was set to emulate the sound of a large hall. The microphone was placed far enough away to allow her to fully use her powerful voice. By contrast, with Alison Krauss the microphone almost touches her lips, allowing her to use a more intimate tone to full effect.

Unlike Krauss, nothing about Nebretko’s performance appears casual. The gown, the makeup, the hair, and the voice all seem larger than life. (Such gowns can cost thousands of dollars, and I find it hard to imagine a more glamorous effect.) The images that we take away from these performances are remarkably different, as they were intended to be. Whatever she is like offstage, in her performance Krauss seems like someone who might, if you met her, talk with you in a relaxed way. In contrast, Nebretko seems like someone who might, if you were lucky, grant you an audience. Krauss seems down-to-earth and approachable; Nebretko seems otherworldly and unreachable.

Their voices and performance personas are each perfectly tuned to resonate in their chosen performance environments. And while each are alluring within their domains, each would find her ability to enchant vastly diminished if forced to trade realms. Lucky us, to have both. 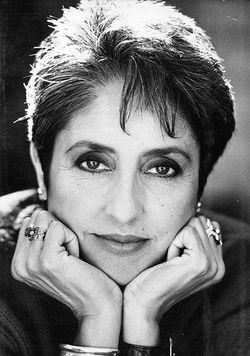 Creating a memorable performance persona is not without danger. A person's public persona and private character are not necessarily the same, and for some people performance images can become traps. In interviews Joan Baez

has discussed falling prey to her own mythology when she was young. Although her interest in folk singing and politics remained steadfast, as she grew older she became interested in high-quality clothing. As the photos at her website reveal, she matured into an elegant woman with a sophisticated fashion sense. In 2008 New Zealand fashion designer Annah Stretton named a dress  and jacket for her. At the 2007 Grammys, when asked about young performers, Baez revealed that now she listens to opera. She has refused to let her early image as a performer define or limit her later appearance or cultural interests.

Some opera singers, expected to be glamorous, may in private prefer comfortable casual clothes and be wonderfully down-to-earth. When they need to present a glamorous image, they costume accordingly. There is exceptional danger in falling prey to the mythology that can surround a diva. Seeing oneself constantly in this mythic light can lead to insufferable behavior. At the peak of her fame, silvery-voiced Kathleen Battle became so unapproachable that she had trouble dealing with both her colleagues and the people providing services for her. Her behavior ultimately became so intolerable that in 1994 she was famously fired by the Metropolitan Opera and has not worked in opera since. Here she is performing the Bach/Gounod Ave Maria with guitarist Christopher Parkening.

An enchantress had become entranced by her image as a performer. As her behavior became increasing governed by delusions of grandeur, she forgot that glamour is always partly an illusion. Her performing colleagues did not forget. When told that she had been fired, they applauded. Given how disruptive her behavior had become, one can hardly blame them. Her voice and beauty were otherworldly, but the world of opera, like all live theater, is here-and-now, and thus requires performers who can come down to earth.

(For examples of Netrebko at work in the theater, look at these excerpts (1 and 2) from a Salzburg Festival production of Verdi’s La Traviata

, as broadcast on German television. With such an over-sized stage, intense vocal presence becomes a necessity.)