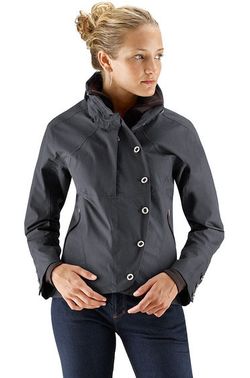 While shopping in Santa Fe, my wife and I discovered a new line of activewear, nau (based in Portland, Oregon), that has made chic urban design one of their main concerns. Their “Urbane Jacket” for women is shown at left. The luxurious-feeling fabric is waterproof/windproof/breathable recycled polyester. The fabrics in every garment that I examined were remarkable, and the construction of the garments was meticulous. High-tech materials and careful construction can make activewear expensive. Patagonia, for example, is known for styling, quality, and being costly (some of our friends call it “Patagucci”).

Nau emphasizes creating garments that will look fashionable in a sophisticated urban market, and still function superbly as activewear. This concern has been important in some urban European markets where many commuters bicycle, and under “who inspires us” nau lists Copenhagen Cycle Chic (as well as Dior, YSL, Balenciaga, Gerhard Richter, and numerous other designers). The company’s web statements list Patagonia and Prada as the kind of company they compete with, and nau’s design sense moves activewear toward a forward sense of fashion that we are more used to seeing from Italian and Japanese designers. 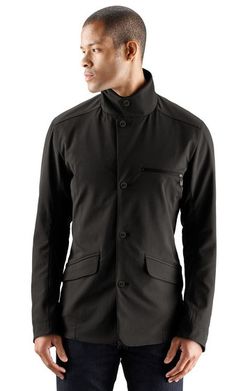 The “Riding Jacket” shown at right is described as “a contemporary update to the traditional blazer.” The 100% recycled polyester fabric is 4-way stretch. Their designs tend to be cut for fit, slender bodies (such as bicyclists often have), and many feature sleeves that are slightly long to help cover wrists during activities such as bicycling.

One of the design principles of the company seems to be to avoid the visible display of their company name on their garments. We have come to expect “look-at-what-brand-I’m-wearing” logos on activewear and ready-to-wear clothing. Yet it is obviously difficult for tags and logos to serve a valid design purpose, and they are seldom found on couture garments. Nau not only avoids frou-frou fabric ornamentation, but also avoids labels of any kind on the outside of their garments—doing so would compromise their minimalist aesthetic. Some other high-end outerwear companies also seem to be moving in a less flashy direction, as concern grows for creating fashionable products suitable for urban wear.

Yesterday I saw a middle-aged man riding an old bicycle along the edge of a  snow-plowed road. The sun was setting, and the temperature was 7 degrees Fahrenheit. He was riding into the wind, so the  windchill was subzero. He was dressed warmly in inexpensive clothing, and was likely riding a bicycle out of necessity. He was on a bus route, but perhaps he couldn’t afford a bus ticket.

I suspect that he represented the ultimate in low-impact commuting, given that his bicycle and clothing were all old and well-used, and perhaps even purchased second-hand. Seeing him reminded me that high-end outerwear is a luxury that most people cannot afford. A single jacket from a top manufacturer could easily cost more than his bicycle, plus everything that he was wearing.

If we can afford them, the high-tech materials in the latest activewear can allow us to be relatively comfortable in extreme conditions of cold, heat, moisture, and wind with less weight and more freedom of movement than was possible with some older materials. On the other hand, for urban wear it is still possible to stay luxuriously warm with fur coats made from the hides and pelts of buffalo, coyotes, beavers, foxes, rabbits, minks, and other animals. The fur option reminds us that there is an environmental cost to the creation of any kind of clothing. Wool can be removed without sacrificing the animal, but raising sheep has an environmental impact, as does raising cotton or manufacturing synthetic fibers.

I visited the websites of a several high-end outerwear companies (companies whose products I wear). As I expected, most of them had pages devoted to topics such as eco-consciousness, social responsibility, sustainability, recycling, and ethics. Such awareness is laudable, and perhaps necessary in an industry in which many of the customers are environmentally concerned. And it is no easy task to convince us that wearing a waterproof, breathable membrane like expanded polytetrafluoroethylene (Gore-tex) is ecologically sound. This web page at Gore-tex uses of a series of images that imply that Gore-tex gives us some of the protective qualities of animal fur without needing to sacrifice the animals.

Thinking about nau’s use of recycled materials, it is a sign of our times that many consumers consider a garment of recycled plastic to be more chic than a fur coat. Yet given that some animals like rabbits, cattle, and bison are being raised for pelts, hides, and meat, I’m not qualified to say whether one of my leather jackets or one of my synthetic-fiber jackets has had a higher environmental cost (setting aside the contentious issue of killing animals). It is difficult to even imagine all the steps involved in creating such jackets (whether starting from raising animals or pumping oil), and finally shipping them to a retail store.

Being eco-conscious leads to complex questions without easy answers. Hopefully caring is at least better than not caring, and awareness allows us to at least question whether the companies we do business with seem to care about such things as sustainability. Of course, in our current cultural climate, companies are likely to say that they do, whether it’s true or not.

Posted by Randall Shinn on December 10, 2009 in Fashion