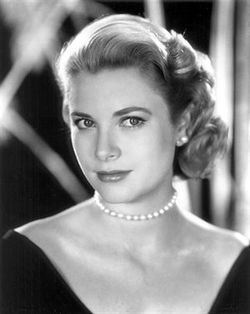 In trying to achieving an elegant effect suitable to a situation, there are many ways to go wrong. At one end there are  possibilities that suggest we made insufficient effort. These can range from a sense that we made no effort (wearing rumpled “around the house” clothes) to being underdressed or out-of-style relative to the occasion and everyone else.

There are also many ways to “try too hard” or show questionable taste: ranging from overdone glitz to being decades out of style. Ever since Liberace took glitz over the top in Las Vegas, some entertainers have confused glitz with glamour. This photo of Elvis Presley in his gold lamé tux exemplifies how show-biz costumes can become outrageously glitzy. Such costumes inevitably crossover into kitsch when wore offstage (whatever you think of them onstage).

One of the widely acknowledged exemplars of elegance was the appropriately named Grace Kelly, show in the above photograph at left. You can find several articles on the web discussing how to look or dress like her, and the emphasis is often on a certain simplicity in clothing design, jewelry, color choices, and use of makeup.

On the other hand, “elegance” implies more than mere simplicity. Dictionary definitions of “elegance” often include the word “pleasingly.” For example: “pleasingly graceful and stylish in appearance or manner,” or, relative to solving a problem, “pleasingly ingenious and simple.” As Albert Einstein said about science, “Make everything as simple as possible, but not simpler.”

This is one of the great quandaries of style in many fields, including fashion, art, and writing. If you want your work to be elegant, you have to do enough to create a pleasing effect; otherwise you will have failed to achieve your aim. In fashion, true elegance can be stunning in effect. Thus effects that are dowdy, shoddy, or just plain dull fail to qualify.

On the other hand, once you have done enough to achieve an elegant effect, adding elements that seem extraneous can weaken the sense of artful simplicity.

Jessica Biel, a beautiful woman, wore the Prada dress shown at left to the 2009 Oscars. The bow on the front was widely criticized as looking sloppy and extraneous, and some critics were surprised that the normally elegant Prada seemed to have  miscalculated in this instance. Yet the outfit cannot be faulted as glitzy became the color scheme and jewelry are so classic and restrained.

For those of us who feel the bow looks “added on,” rather than ingeniously integrated, it is a single design flaw, but nonetheless regrettable in that we feel that we might have admired the dress without the bow. In contrast the addition of rhinestones to Elvis’s gold lamé tuxedo is of little consequence. The gold lamé has already pushed the concept of a formal tux so far into glitz-ville that some extra sparkle just turns it into extreme kitsch—gold lamé made superbly lame.