A Better Version Of The Amelia Earhart Story 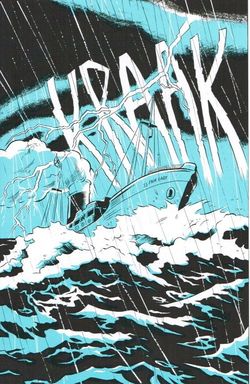 As readers who read my DoubleX piece on Amelia (and Amelia) know, I think the movie deservedly bombed, largely because Amelia Earhart is an intrinsically difficult subject for a biopic. As a glamorous icon, she is not a person but a persona, someone we “know” from the outside, for what she represents rather than who she actually is. Her distance and mystery are a big part of her allure. A movie preserves that appeal inevitably tends to be boring, while a movie that portrayed her as flawed (perhaps not such a great pilot) would lose its audience.

While I was writing that piece, I thought whether you could write a script about Earhart that preserved her glamour but wasn't emotionally flat. One idea would be to tell a story not about her but about someone who observes and is inspired by her. Another would be to emphasize the challenges and hazards of early aviation, something that Amelia did in its best moments but downplayed in favor of a flattened soap opera.

, a graphic novel aimed at tweens, does both. And while the book, written by Sarah Stewart Taylor and drawn by Ben Towle, doesn't have enough plot to make a movie, it demonstrates that the way to portray Earhart is, in fact, to use a sympathetic protagonist who admires her. The graphic novel makes the wise choice to show us Earhart through the eyes of an admirer, a girl who lives in the seafaring community of Trepassy, Newfoundland, and aspires to be a newspaper reporter. Located on the far eastern edge of North America, Trepassy is the point from which Earhart and other aviation pioneers took off for Europe. It's also a shipwreck-strewn place whose name essentially means "the dead."

From the Publisher's Weekly review:

In June of 1928, tweener Grace, the dubious townspeople and a mob of impatient newsmen wait for Earhart to finally get her plane in the air for a transatlantic flight. Grace yearns to leave the little village and to become a newspaper woman, so she observes the commotion and manages to get the aviator's personal encouragement in an interview before her successful departure. Taylor's lean script leaves much of Grace's feelings understated but easy to imagine. Towle's art is also emotionally restrained, but panels showing the bleak landscape—especially double-page spreads of what Earhart called “this broad ocean”—emphasize the courage of people willing to take ultimate risks. Astronaut Eileen Collins's introduction, which describes the inspiration she drew from Earhart's example, carries the theme to the present.

Grace's point of view preserves Amelia as a glamorous, somewhat mysterious figure who represents a different life. You can get a sense from this spread. (As always, click the images to see a larger version.) 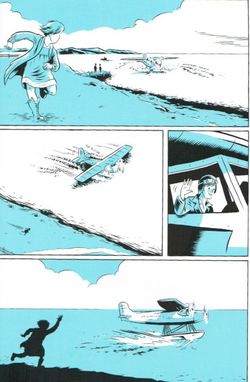 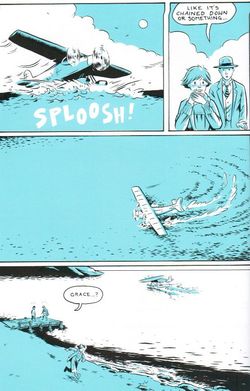