The following correction ran in the April 18, 1903 issue of the Dry Goods Reporter, a retailing trade publication:

In an article by Mr. J. F. Phelan of the Phelan Dry Goods Company, Galesburg, Ill., under the head "Ladies' Ready-made Garment," that appeared in the "Reporter" some weeks back, Mr. Phelan desires the following corrections: The expression "women do not attend so carefully to their business as do the men" is an error. The remark that "women get married when valuable as salespeople" is also incorrect. The words "married men are even more reliable and usually more respectable than single men" should have read "I believe they are more reliable and more responsible."

Thinking that the correction might be satirical, I found the original article, which ran January 3. The correction was no joke.

Regarding help, I find that men are much more satisfactory. Ladies do not attend so carefully to the business, I find, as do the men. Men folks seem to be more reliable. The girls are often interested in outside matters, and they are not able to concentrate their minds on the business so closely as are the men. They are getting married when valuable. Married men are better help than unmarried, as I believe they are even more reliable and usually more respectable.

I'd love to know what transpired in the three months between the article and the correction.

Five Myths About Glamour: Cato Institute talk and discussion about The Power of Glamour

My speech at the Cato Institute, followed by interesting comments from Tyler Cowen and Sam Tanenhaus and good audience questions, introduced by Walter Olson.

Here's the graphic version of my message: 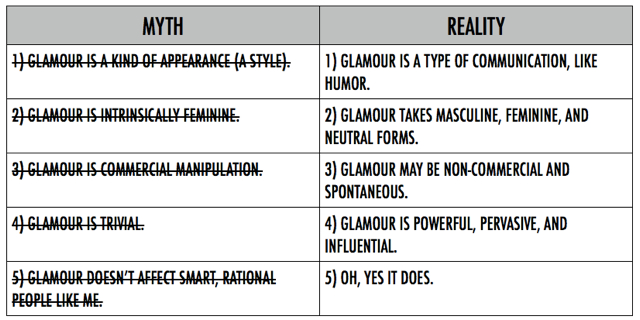 The Washington-Hollywood Nexus: Talking Glamour and Politics with Brian Lamb

In this one-hour C-SPAN video, I answer Brian Lamb's questions about relations between Washington and Hollywood and, I hope, dispel the notion that rounding up some over-the-hill movie stars equals glamour, at least anywhere but Washington.

For a fuller discussion of glamour and politics, see my talk at the John Locke Foundation here.