"Get the Best Experts in a Room" and What Do They Say? Fix Medicare

In my latest Bloomberg View column, I argue that the Republicans ought to emulate Ross Perot's 1992 campaign infomercials:

The traditional roles of a U.S. presidential running mate are ticket balancer and attack dog. With their choices of Al Gore and Dick Cheney, Bill Clinton and George W. Bush added another: the brainy policy partner with big-picture views.

Mitt Romney, the presumptive Republican presidential nominee, is following that model in picking Paul Ryan. Ryan fires up the party's base, but he's also a policy wonk who could actually help a victorious candidate govern.

As a candidate, the telegenic, articulate Ryan could play another much-needed role. He could be a great communicator, educating the public about policy challenges and Republican plans to address them.

Here I'm thinking not of Ronald Reagan but of a quirkier candidate. Two decades ago, Ross Perot riveted the public with his half-hour prime-time lectures on the dangers of the budget deficit. People still remember his hand-held charts.

The Perot commercials treated the voters as intelligent citizens hungry for knowledge and willing to sit still long enough to absorb it. Perot didn't offer especially cogent ideas for dealing with the deficit -- his main prescription was to get the "best experts" in the room and have them come up with a plan -- but he effectively focused attention on the issues, particularly the federal budget. His commercials capped a campaign year in which voters, anxious about recession and restructuring, were unusually engaged with economic policy. (Clinton's economic plan -- summarized in the manifesto "Putting People First" -- became, like Perot's, a best- seller.)

We're in another anxious period, and voters are again primed to consider serious policy talk. To play up its team's strengths as numbers guys, countering the self-congratulatory idea of Democrats as the party of intellect, the Romney campaign could make a gutsy move. It could deploy Ryan to talk to the public at length about the looming fiscal crisis, producing a series of long-form, Perot-style videos. Nowadays the Republicans wouldn't even need to spend money for prime-time television (although that would certainly get attention). They could rely on YouTube.

In the current environment, Perot's technocratic faith in "the best experts" looks especially naive. Even when they agree on the problem, smart policy wonks can still disagree about what to do, because they have fundamentally different assumptions about the proper role of government or different ideas of what systemic effects are likely to result from a given reform. You need only contrast Paul Ryan's general take to what Peter Orszag, formerly Obama's OMB director and now (among other things) my colleague as a Bloomberg View columnist, wrote in response to the Ryan pick.

It's worth noting, however, that despite their significant differences the two do agree on one thing that a lot of voters don't want to hear: exploding Medicare spending is the biggest problem facing the federal fisc. Medicare's open-ended entitlement to whatever health care you want has to be changed somehow. They just disagree on what to do about it.

The LAT reports on an upcoming test of hypersonic flight:

In a nondescript hangar at Edwards Air Force Base in the Mojave Desert, a team of aerospace engineers has been putting the finishing touches on a lightning-quick experimental aircraft designed to fly above the Pacific Ocean at 3,600 mph. A passenger aircraft traveling at that speed could fly from Los Angeles to New York in 46 minutes.

Although the technology is new, the attitude is very mid-twentieth-century. In the future, we will all go even faster!

Nevada Threatens Schools for Makeup Artists: Another Business You Need a License to Build

In its never-ending quest to protect the right to run a business, the Institute for Justice is defending two entrepreneurs whose successful schools for makeup artists are being threatened by Nevada state authorities.

In my most recent Bloomberg View column, I used President Obama's infamous "You didn't build that" remarks as an occasion to introduce readers to Deirdre McCloskey's concept of "bourgeois dignity" and her important new book Bourgeois Dignity: Why Economics Can't Explain the Modern World

The controversy surrounding President Barack Obama's admonishment that "if you've got a business -- you didn't build that. Somebody else made that happen" has defied the usual election-year pattern.

Normally a political faux pas lasts little more than a news cycle. People hear the story, decide what they think, and quickly move on to the next brouhaha, following what the journalist Mickey Kaus calls the Feiler Faster Thesis. A gaffe that might have ruined a candidate 20 years ago is now forgotten within days.

Although his supporters pooh-pooh the controversy, claiming the statement has been taken out of context and that he was referring only to public infrastructure, the full video isn't reassuring. Whatever the meaning of "that" was, the president on the whole was clearly trying to take business owners down a peg. He was dissing their accomplishments. As my Bloomberg View colleague Josh Barro has written, "You don't have to make over $250,000 a year to be annoyed when the president mocks people for taking credit for their achievements."

The president's sermon struck a nerve in part because it marked a sharp departure from the traditional Democratic criticism of financiers and big corporations, instead hectoring the people who own dry cleaners and nail salons, car repair shops and restaurants -- Main Street, not Wall Street. (Obama did work in a swipe at Internet businesses.) The president didn't simply argue for higher taxes as a measure of fiscal responsibility or egalitarian fairness. He went after bourgeois dignity.

"Bourgeois Dignity" is both the title of a recent book by the economic historian Deirdre N. McCloskey and, she argues, the attitude that accounts for the biggest story in economic history: the explosion of growth that took northern Europeans and eventually the world from living on about $3 a day, give or take a dollar or two (in today's buying power), to the current global average of $30 -- and much higher in developed nations. (McCloskey's touchstone is Norway's $137 a day, second only to tiny Luxembourg's.)

That change, she argues, is way too big to be explained by normal economic behavior, however rational, disciplined or efficient. Hence the book's subtitle: "Why Economics Can't Explain the Modern World."

You can read the rest here.

Obama's fans have, of course, rushed to his defense, generally by arguing that the president was making a completely obvious, non-controversial point with which everyone with the slightest awareness of the world agrees. Here's a typical email I received (picked merely because it was the most recent and therefore easiest to retrieve):

the only reason you call what the President said a faux pas is because, like Fox News, you took what he said completely out of context. Tell me, Ms. Postrel, can you name one company that has managed to exist and build itself into success with just the company owner involved? One company that is successful without employees, customers and the infrastructure to support it? And by infrastructure I mean such things as roads, railroad lines and such. Can you name such a company? Because Mitt Romney has been trying to for the last several weeks now since the President made those remarks and Mr. Romney has been failing pathetically at it.

Because that is what the President was talking about..that a company relies on people and things besides just it's owner to succeed. What the President said only is a faux pas if one takes him completely out of context and is so incredibly intellectually dishonest that one sits there like you and Fox News and all the conservatives and pretends that companies are an island onto themselves where the only person that made it successful is the company owner.

If that's all the president meant, then why did he make a point of saying it? Who on earth did he think he was arguing with? The many entrepreneurs who think they don't need customers, employees, and roads? I'm pretty sure that even Rupert Murdoch would not question that claim.

Immediate electoral issues aside, this rush to say that the president was just repeating truisms and not actually trying to run down entrepreneurs is gratifying. It suggests that bourgeois dignity is alive and well, making attacks on it unthinkable. 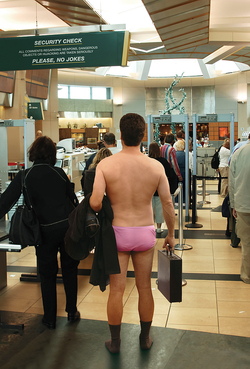 The front page of today's NYT carries this investigative piece about racial profiling by TSA officers at Boston's Logan Airport. Since two of the 9/11 flights originated there, you might think local officers were just jumpy about terrorism. But no. They're allegedly targeting blacks and Hispanics, especially those bound for Miami, because of pressures to find people who can be arrested for reasons having nothing to do with terrorism or any other violent threat to the safety of air travel. From the story by Michael S. Schmidt and Eric Lichtblau, which you should read in full:

At a meeting last month with T.S.A. officials, officers at Logan provided written complaints about profiling from 32 officers, some of whom wrote anonymously. Officers said managers' demands for high numbers of stops, searches and criminal referrals had led co-workers to target minorities in the belief that those stops were more likely to yield drugs, outstanding arrest warrants or immigration problems.

The practice has become so prevalent, some officers said, that Massachusetts State Police officials have asked why minority members appear to make up an overwhelming number of the cases that the airport refers to them.

"The behavior detection program is no longer a behavior-based program, but it is a racial profiling program," one officer wrote in an anonymous complaint obtained by The Times.

The TSA has no business looking for drugs, outstanding arrest warrants, or immigration problems unless it has serious reason to believe that the person involved poses a serious threat to air safety. If it is going to serve as an extension of every other sort of law enforcement, then its searches should be subject to the same requirements for probable cause, which would allow almost everyone to travel without submitting to TSA examination.

It's Not Just Terrorists Who Take Advantage: Someone will propose new "Antiterrorism" legislation. It will be full of things off of bureaucrats' wish lists. They will be things that wouldn't have prevented these attacks even if they had been in place yesterday. Many of them will be civil-liberties disasters. Some of them will actually promote the kind of ill-feeling that breeds terrorism. That's what happened in 1996. Let's not let it happen again.

And that's exactly what happened.

(The headline is not technically accurate, since the TSA does not arrest people. It refers them to other law enforcement agencies.)