Writing on my Facebook page, Reason's Shikha Dalmia recalls her own May visit to the Shanghai Expo, along with some local Chinese.

They were terribly disappointed with the US exhibit and regarded its lack of seriousness almost as a slap on the face. They were really moved by the dazzling Chinese pavilion -- which suggested to me that the real reason Chinese authorities have spent $60 billion on such a white elephant, in addition to what you mention, is to keep alive a spirit of nationalism.

The U.S. pavilion, which looks like a prefab movie theater and whose main feature is the filmic equivalent of a guidance counselor poster, is famously lame. But the Chinese misunderstand why. It's not a slap at China. It's a slap at world's fairs. On a positive note, it features great, improvised performances by bilingual U.S. college students, who do things like teach the Chinese crowd to shout, "YOU...ARE...AWESOME."

Shikha's comment gives me an excuse to resurrect some material that didn't make it into my final column. An earlier draft included the following observation on the boosterism of world's fairs:

It gives visitors the same thrill Sam Hyde, a bookkeeper from Belleville, Illinois, felt upon entering the 1904 St. Louis World's Fair: the feeling "that the whole world [is] there and every nation [is] showing its best products and doing its best to please."

Here is the most peculiar aspect of world's fairs. As classic tools for city and national boosters, they combine openness to the world with a sense of (often-defensive) local superiority: We are the center of civilization, our culture its standard; that's why everyone's here. The foreign exhibits simultaneously validate the host's importance and provide a sort of petting zoo of exotic cultures. Remembering his 1904 visit, Sam Hyde noted the popularity of the Filipino military band, praising the "extraordinary talent of those little brown fellows." Today's readers cringe at his language, but the point of the sentiment is appreciation, not difference. Exoticism provides a bridge to empathy. But the locals still determine the standard of value.

That's psychologically realistic. The official ideology of international expositions may stress common humanity, but one thing human beings have in common is the tendency to divide the world between our group and others. The Chinese want to celebrate China, and Chinese fairgoers really do view all those foreigners as foreign. The deception lies in the way international expositions gloss over conflicts, portraying a world as harmonious as the International House of Pancakes. (Both "Bel-Gem waffles" and Disney's "It's a Small World" were hits in 1964.) In Shanghai, irony-minded westerners head for the North Korean and Iranian pavilions, conveniently located next to each other on the unofficial axis of evil.

And here's a photo:

The Lost Glamour of World's Fairs 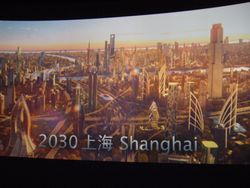 Americans long ago consigned world's fairs to the toy box of history. Once celebrated as showcases of world cultures and windows into the future, these grand expositions lost their glamour sometime during the Johnson administration. Like Space Food Sticks and Jonny Quest, they are fondly remembered — at least by those over 50 — but a bit ridiculous: all that ethnocentricism, naive internationalism, and technological good cheer. The last one to warrant much attention was Montreal's Expo '67, from which the now-defunct baseball team took its name. (Sorry, Seville '92.) Our cynical culture is done with world's fairs.

Not so for Shanghai, where Expo 2010 opened on May 1 and runs through October. In its first two months, the Shanghai Expo attracted more than 20 million visitors, mostly from China itself. Spanning more than 1,300 acres on both sides of the Huangpu River, the fair is an ubiquitous presence throughout the city. Public gardens reproduce the logo in white flowers, subway-car TVs broadcast upbeat interviews with exhibitors and tourists, huge LED screens on downtown buildings play promotional videos, and street vendors hawk knockoffs of its squat, blue, Gumby-like mascot. Visiting Shanghai in May, I quickly discovered that the Chinese authorities haven't lost their zeal for propaganda. They've just changed their colors from revolutionary red to Expo green.

Taking place in a society that is both authoritarian and rapidly developing, the Shanghai Expo highlights the double-edged allure of world's fairs, which are both deceptive and inspiring. The Expo's cheery boosterism and sanitized reality match Lawrence R. Samuel's description of the 1964 New York World's Fair in The End of the Innocence: a "protective cocoon" where "foreign nations sang in harmony, corporations existed to produce things that made life better, and, most important, the future looked brighter than ever." Like all glamorous objects, the '64 fair was an illusion. Yet its optimistic spirit, and those of other fondly remembered world's fairs, fostered attitudes that often did produce real progress. "For the tens of millions of kids who went," writes Samuel, who was one of them, the fair "planted a seed of the possibility to achieve great things."