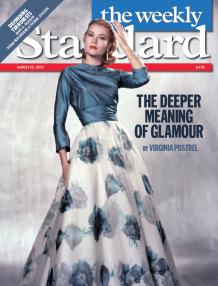 After C-SPAN reran a 1999 BookNotes interview about my first book, I received an email from a disappointed viewer. He was chagrined to hear that I was editing a website called DeepGlamour instead of writing "more serious nonfiction." Glamour, he implied, is a trivial subject, unworthy of consideration by people who watch, much less appear on, C-SPAN.

To which I have two words of response: Barack Obama. In an era of tell-all memoirs, ubiquitous paparazzi, and reality-show exhibitionism, glamour may seem absent from Hollywood. But Obama demonstrates that its magic still exists. What a glamorous candidate he was — less a person than a persona, an idealized, self-contained figure onto whom audiences projected their own dreams, a Garbo-like "impassive receptacle of passionate hopes and impossible expectations," in the words of Time's Joe Klein. The campaign's iconography employed classically glamorous themes, with its stylized portraits of the candidate gazing into the distance and its logo of a road stretching toward the horizon. Now, of course, Obama is experiencing glamour's downside: the disillusionment that sets in when imagination meets reality. Hence James Lileks's recent quip about another contemporary object of glamour, "The Apple tablet is the Barack Obama of technology. It's whatever you want it to be, until you actually get it."

As critics who denounce movies that "glamorize violence" or "glamorize smoking" understand, glamour is much more than style. It is a potent tool of persuasion, a form of nonverbal rhetoric that heightens and focuses desire, particularly the longing for transformation (an ideal self) and escape (in a new setting). Glamour is all about hope and change. It lifts us out of everyday experience and makes our desires seem attainable. Depending on the audience, that feeling may provide momentary pleasure or life-altering inspiration. Read the rest, a longish review-essay, at The Weekly Standard.