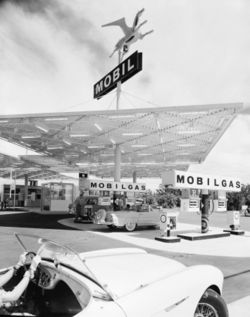 This image, while not one of his most famous, is one of my favorites of his works. The convertibles, the gloves, the Pegasus, the pristine gas station, the orange trees in the background (soon to become Disneyland) — it exemplifies the exuberant glamour of mid-century Southern California auto culture. (Click the photo for a larger version.)

I interviewed Shulman about it in 2006, when I was researching this Atlantic column. Here's the transcript of our conversation.

"An architect friend Whitney Smith and his partner Wayne Williams were commissioned by Mobil Gas to do a mockup for a new type of design for the Mobil Gas image, including the flying horse. In the background what do you see?"

"Those aren't bushes. Those are trees. They're orange trees. There's a story....The architect's wife was there. She was driving an Alfa Romeo convertible, with white gloves. I had her pull her car up just far enough that the bumper would not come inside that shadow line. And then her arms would show. She's just coming in to get gas, to that station. It's a story-telling picture."

Was that her real car? I asked. Or was she posing in someone else's? 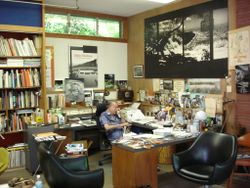 "Yes, that's her car. My sedan, my blue Ford sedan, which I used for my work, was elsewhere, in another picture. But I got another convertible here. I asked the man to stay there for a minute while I took a photograph. I'm sure he was happy to do it. He pulled in. The moment he pulled in — I had placed her already — I ran over there and said, 'Would you mind? I have a young lady with a car waiting for me, with a convertible.' He loved the car. He came over to look at it. I said, 'Would you stay in your car while I photograph it? I'll have the attendant talking to you, How many gallons do you want?' Everyone cooperates. It never fails. So we took this photograph in black and white and color, a series of them. Especially in color, it's wonderful."

In the Future, Everyone Will Work for FREE

In Sunday's NYTBR, I review Chris Anderson's new book, Free: The Future of a Radical Price

Fifteen years ago — before Google or Wikipedia or blogging or Craigs­list or podcasts or YouTube — the technology investor and pundit Esther Dyson wrote an article analyzing the business of "creative content" in a future where the Internet made distribution essentially free. "Creators will have to fight to attract attention and get paid," she predicted. Enforcing copyrights won't be enough, because creators "will operate in an increasingly competitive marketplace where much of the intellectual property is distributed free and suppliers explode in number. . . . The problem for owners of content is that they will be competing with free or almost-free content."

That future is today, and it is the subject of Free: The Future of a Radical Price

by Chris Anderson, the editor in chief of Wired and the author of The Long Tail

Despite its subtitle, the book is less about the future than the present and recent past, which Anderson surveys in a cheerful, can-do voice. "People are making lots of money charging nothing," he writes. "Not nothing for everything, but nothing for enough that we have essentially created an economy as big as a good-sized country around the price of $0.00."

Driving the trend are the steeply declining prices of three essential technologies: computing power, digital storage and transmission capacity. Reproducing and delivering digital content — words, music, software, pictures, video — has now fulfilled the prophecy once made about electricity. It has become too cheap to meter. "Whatever it costs YouTube to stream a video today will cost half as much in a year," Anderson writes. "The trend lines that determine the cost of doing business online all point the same way: to zero. No wonder the prices online all go the same way."

More precisely, the marginal cost of digital products, or the cost of delivering one additional copy, is approaching zero. The fixed cost of producing the first copy, however, may be as high as ever. All those servers and transmission lines, as cheap as they may be per gigabyte, require large initial investments. The articles still have to be written, the songs recorded, the movies made. The crucial business question, then, is how you cover those fixed costs. As many an airline bankruptcy demonstrates, it can be extremely hard to survive in a business with high fixed costs, low marginal costs and relatively easy entry. As long as serving one new customer costs next to nothing, the competition to attract as many customers as possible will drive prices toward zero. And zero doesn't pay the bills.

Read the whole thing. Unlike the typical journalist's review, this one isn't just a tantrum.

More than 80,000 patients are now on the national waiting list for kidney transplants, a number that has increased by about 20,000 since I first started tracking this issue in 2006. The list does not have to exist. It is an outcome of bad policy and complacent institutions. My magnum opus on ending the list is now up at TheAtlantic.com. Please read it and spread the word.

But they're still incredibly high, even by L.A. standards.

Though anything but plush, California's prisons are scandalously expensive, thanks largely to the bipartisan clout of the prison guards' union. The SacBee's Dan Walters reports:

It is, by a very wide margin, the costliest prison system among the largest states, with a per-inmate cost that prison officials tag at around $45,000 a year, roughly what it costs to send a youngster to one of the more prestigious private universities.

The average among the nation's 10 most populous states, according to one recent calculation, is $27,237 per year per inmate, including states with substantially higher incarceration rates, such as Texas. Therefore, prisons consume a much-higher portion of California's general fund budget than those of other states — more than 10 percent.

The other nine states' prison costs range from less than 4 percent of their general fund budgets (Florida) to 8.2 percent (Michigan) with an average of about 6 percent. Or to put it another way, were California spending an average amount on its felons, it would be spending about $4 billion less each year.

Given the state's financial collapse, Walters concludes that Schwarzenegger is right to endorse privatization: "If it's time to get serious about cutting our prison costs, private management could scarcely be worse than what we have now."

Mark Kleiman is always good for some creative ideas on producing better, cheaper criminal justice. And he's hardly some kind of Republican tool.

Perhaps what really offends is the flier's truth in advertising. If the Post didn't try to charge for attendance, most journalists, politicians and lobbyists would have leaped at the chance to attend. That's the way things used to work for Weymouth's grandmother, Katharine Graham, who hosted Washington's most famous high-powered salon for decades.

Of course, that was when newspapers were hugely profitable and money was the tawdriest medium of exchange. That's what makes all the outrage so quaint. It's like passengers on the Titanic refusing to leave their cabins before the steward lays out their evening clothes. Some things just aren't done.

And before Kay Graham was hosting those salons, Ben Bradlee was kickin' it with JFK.