"Reality programming also serves as a way for a divergent culture to stay in touch." From a typically smart post by Grant McCracken.

The home of a UC-Santa Cruz medical researcher was firebombed over the weekend, apparently by unremorseful animal-rights activists. From the San Jose Mercury News report:

While a spokesman said he didn't know who was responsible, the Woodland Hills-based Animal Liberation Front called the attacks "necessary," similar to the fight against civil rights injustices. Spokesman Dr. Jerry Vlasak showed no remorse for the family or children whose home was targeted.

"If their father is willing to continue risking his livelihood in order to continue chopping up animals in a laboratory then his children are old enough to recognize the consequences," said Vlasak, a former animal researcher, who is now a trauma surgeon. "This guy knows what he is doing. He knows that every day that he goes into the laboratory and hurts animals that it is unreasonable not to expect consequences."

More here from the SF Chronicle.

With its much-discussed attack ads, the McCain campaign is trying to do something difficult: to puncture Barack Obama's glamour without resorting to insinuations of horror (the Manchurian Candidate fears mocked on The New Yorker's famous cover). The first attempt, the Paris-and-Brittany ad, was lame. It was neither funny nor convincing, and it confused glamour, which inspires, with tabloid celebrity, which titillates and makes the audience feel superior. (The claim that the ad is racist, because the tabloid princesses are white and blonde, is absurd.) Throwing in stuff about offshore drilling, presumably an attempt at substance, just made it weird.

The second ad, "The One," is more successful and more interesting. Here is full-bore 1990s (or 1980s, if you go back to Spy) hip comedic irony--laughing at the earnest and self-important. Mainstream political candidates don't do that, least of all if they're Republicans. Mainstream political candidates, Republicans especially, are the ones comedic ironists laugh at. Besides, comedic irony is for young people, not oldsters like John McCain.

Except the young people who made irony hip--late boomers and GenXers--are now middle-aged. Obama is selling an end to irony, a return to unchastened New Frontier liberalism, at least in feeling. (How that lines up with specific policy proposals is a more complicated question.) Maybe hip isn't hip any more.

McCain's ad is calculated to appeal to people who think that sort of grandiosity is ridiculous. Many of those people happen to be part of McCain's traditional "base," the media, including the irony-drenched talk shows from which lots of youngish people get their political news. Reminding them of Obama's grandiosity won't make them vote for McCain. But it might embarrass them into helping to puncture his opponent's glamour.

Meanwhile, it turns out that the People magazine cover of the Obama family sold worse than the magazine's average, 1.4 million copies versus a typical 1.45 million. Now Barack Obama covers usually sell very well--and, judging from my haphazard West LA survey, that New Yorker cover blew off newsstands within minutes--so what's up with People? The problem I think is that readers aren't interested in Obama-the-wholesome-family-man. They want The One.

The Glamour of the Chrysler Building

"Is the Chrysler Building the world's most glamorous building?" someone asked me recently. It was meant as a rhetorical question, a way of defining glamour. Without using the g-word, the WSJ's Bret Stephens makes the case:

[W]hat distinguishes the Chrysler is its ability to inspire, as few modern buildings do, a sense of fantasy. For one thing, it achieves a skyscraper's fundamental task: It soars. From its first recess, just above the Lexington Avenue entrance, it follows an uninterrupted vertical path directly to the 68th floor, and only then begins to taper toward the spire.

Then there is the way the building remains perennially modern, perhaps because it is forever the past's imagining of the future. The entrances -- framed in black granite, zig-zagging patterns of metal and opaque yellow glass -- seem drawn from Fritz Lang's "Metropolis" or a Batman comic....

And finally -- again -- there is that fabled Chrysler top. Today's tall buildings (few of which really deserve to be called skyscrapers) are often nothing more than stacks of all but identical floors, none really different from the other except, perhaps, for the view. Not so in the Chrysler Building, where the highest nine stories become progressively smaller as they rise toward the vanishing point. Seen from within, it conveys the sensation of an aerie, or a crow's nest, or a mountaintop -- not merely a higher place, but another world.

Is it the world's most glamorous building? It may very well be, I said, but it has competition from Disney Hall, LA's instantly beloved and much photographed landmark. (Couples even take wedding pictures there.) While the Chrysler Building creates glamour through streamlining, Disney Hall does it with complexity, which creates mystery without hiding anything. It's too complicated to comprehend in full--a model for glamour in a world without privacy.

Of course, the world's most glamorous building could be the Taj Mahal. But I've never seen it.

Thanks to everyone who's sent emails asking about the state of my health. After quite a year, I'm happy to say that I'm doing fine. I completed radiation therapy on July 3 and, as the oncologists put it, I have "no evidence of disease." I still have a few more triweekly Herceptin treatments to go, but they have no side effects. 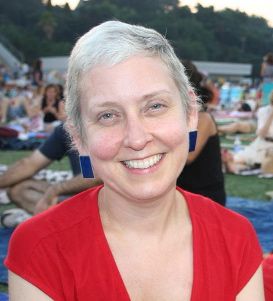 This photo was taken July 4, while we were waiting for the South Pasadena fireworks. As you may be able to tell, my formerly straight hair came back in curly. Apparently, that happens a lot after chemo. Eventually, the hair goes back to its former state, but it can take a couple of years.