Rod Dreher posts a picture of his notebook from 9/11. He was interviewing people on the Brooklyn Bridge when the towers collapsed. (Via FrontBurner.)

I don't have a column in the new October issue of The Atlantic, but for those of you who don't subscribe (you should--it's a bargain!), I've updated the free column archives on this site with my columns on science glamour, George Hurrell's Hollywood portraits, and neighborhood paint wars.

Ronald Reagan might have been in B-list films, but he was often the star. Fred Thompson may hit the A-list, but he's never the star. Robert George carries the analogy to their political careers. (Read the whole thing to get the punch line.)

From an excellent profile/interview by Joel Garreau

Every toy I had as a child that haunted me, I've been able to see on eBay. The soft squeezy rubber frog with red shorts that made 'eek eek' noise until that part fell out. I found Froggy after some effort on eBay, and I found out that Froggy was made in 1948 and where he was made and what he was made of. I saw his box, which I'd long forgotten. I didn't have to buy Froggy, but I saved the jpegs. So I've got Froggy in my computer.

This is new. People in really small towns can become world-class connoisseurs of something via eBay and Google. This didn't used to be possible. If you are sufficiently obsessive and diligent, you can be a little kid in some town in the backwoods of Tennessee and the world's premier info-monster about some tiny obscure area of stuff. That used to require a city. It no longer does." 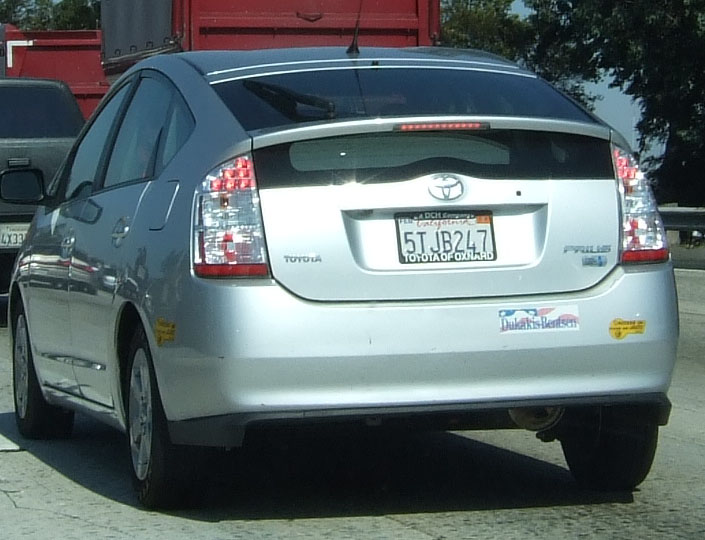 A Prius driver with a long political memory. Much wittier than the typical anti-Bush stickers you see in these parts. (No, I was not driving when I took this photo.) Click on the photo for a larger version.

A QUERY: A couple of readers have written to say that they can't see the photo or get the link by clicking on it. But they're both there in the code and they work fine on my browser (Safari) and, as far as I can tell, on most people's computers. Any theories?

Driving home from Santa Barbara yesterday, Steve and I spotted a man shaving while driving (with an electric razor, but still...) and a woman curling her eyelashes while driving. We also passed this burning big-rig truck, reportedly full of flour.