What Color Is Your Sushi?

In response to the post below on light bulbs, my friend Nick Schulz of TCS Daily writes:

We recently installed the new fluorescents in the sockets in our dining room. Last night, my wife and I were sitting down to eat some sushi we'd brought home. She said, "I can't believe they gave us salmon instead of tuna." As it turned out, the new lights made the red tuna look like orange salmon. She took the sushi in the kitchen, where we have the plain old bulbs and are waiting for them to expire to put in the new ones. Sure enough, the tuna in that room looked like tuna.

Also, the new bulbs, I found out after having purchased them, are loaded with mercury. So make sure you don't break any of them. Pick your poison — reduce your carbon footprint but increase your risk of mercury poisoning.

Lastly, a relative of Edison made this point a few weeks back about warm vs. cool lighting

Speaking of mercury, reader Shaun Moore writes, "Tell this woman that CFL are better than incandescents." Hint to bulb breakers: Just get a vacuum cleaner and leave the authorities out of it. (I know mercury is poisonous, but we had so much fun as kids chasing it around the floor when the thermometer broke.)

It's the Aesthetics, Stupid

"There is still a big hurdle in convincing Americans that lighting-purchase decisions make a big difference in individual electricity bills and collectively for the environment," said Wendy Reed, director of the federal government's Energy Star campaign, which labels products that save energy and has been working with retailers to market CFL bulbs.

No, that is not the big hurdle. The big hurdle is convincing Americans that ugly lighting is worth the savings--as Ms. Reed herself knows.

"I have heard time and again that a husband goes out and puts the bulb into the house, thinking he is doing a good thing," Reed said. "Then, the CFL bulb is changed back out by the women. It seems that women are much more concerned with how things look. We are the nesters."

If you want to get people to use compact fluorescents, convince them that the lighting looks good--they already know it saves electricity. And show, don't tell.

A War on Book Reviewers?

Is there really a book reviewing crisis? On his new blog, Alex Massie, The Scotsman's man in Washington, says no. I particularly liked this point: "It's not clear to me, incidentally, why a 'stand alone' book section is necessarily better than one that includes other copy. Indeed, if you wanted to pull new readers in to a books section the last thing you'd want would be to make it easy for them to throw it away unread, no? And if the stand-alone section is so sacred then British newspapers don't have proper books pages..."

As an author, I want more book reviews; quantity matters more than quality when you're going for sheer exposure. But as a reader, I only want more interesting reviews, particularly of books I'm not likely to learn about otherwise. (Here's a good example, from Sunday's LAT.) What Alex calls "the loss of pagination at a few provincial newspapers"--notably, in my life, the Dallas Morning News--mostly represents the loss of reviews that are short, dull reports on books everyone already knows about. Not a crisis, let alone a war on books or even (interesting) reviewers.

Kathryn Fiegen of the Iowa City Press-Citizen has written a nicely reported piece, using a striking local example to illustrate the importance of living kidney donors.

Yolanda Frudden, 52, of Iowa City, transports lab results at University Hospitals. Kathy Duttlinger, 50, of Iowa City, takes care of the plants in the hospital. They seldom saw each other, except in the hallway or in the elevator.

But one day a little more than a year ago, a ride together in the elevator would change both of their lives forever.

Frudden had just gotten to the end of a rope of bad news. She recently had been diagnosed with kidney disease and was searching through her family to find a match for transplant. Both of her brothers were perfect matches. However, both had a form of hepatitis. On that day, she had just returned from a trip to the Philippines, where one of her brothers lives with her family "I was really desperate," she said. "I was actually in tears."

Duttlinger got on the elevator and asked what was wrong. She said she knew Frudden was sick, but not as sick as she actually was.

"I just felt for her, and I thought maybe I could help her," she said.

Fiegen's article is exemplary for reporting the story long enough after the surgery--which took place in January 2006--to let readers know the results. More than a year later, both donor and recipient are doing well. And Iowa is better than most places to be a living donor, especially if you're a state employee. The state's Donor Network, which allocates organs from deceased donors, actively support living donation, and living donors get a state income tax deduction. So they're less likely to wind up financially behind, because of lost wages, than donors elsewhere.

Because Duttlinger works at University Hospitals, she got five weeks of leave for being an organ donor, and Frudden's insurance paid for both procedures.

[Iowa Donor Network spokesman Paul] Sodders said all state employees get six weeks of paid leave to donate, without cutting into vacation time. The network currently is working with other major employers to see if they will draft similar policies, he said. Iowa also is one of the few states that offer a tax deduction of up to $10,000 for living donors.

"We're trying to make the process as easy as we can on these living donors," he said. "We're really beginning to advocate people being living donors because we really think that is the answer to cutting down on the waiting time."

Bravo to the Donor Network and the state of Iowa for their progressive attitudes--and to Kathryn Fiegen for covering this important issue.

"She got the wrong man and a D and A test will prove my innocent," Keith Turner, who had served six years in prison for rape, wrote to the Dallas district attorney years after he was paroled. In today's Dallas Morning News, Bruce Tomasco tells the story of how Turner's persistent requests for a DNA test--something he heard about on Court TV in 2001--finally got his name cleared. It's a sad, compelling piece, worth reading in full.

The DMN website has posted copies of documents from the case, including Turner's poignant, painfully respectfu, semi-literate letters.

As Reason's Radley Balko points out, Dallas seems to be exonerating a lot of prisoners--12 so far, with more than 400 waiting for DNA tests--but it's unlikely the city has an especially bad track record. It just has more evidence on file.

[New district attorney Craig] Watkins' quest to clear the names of the innocent is aided by the fact that Dallas County coincidentally has historically preserved blood samples from cases involving violent crime. Most other jurisdictions across the country only recently began doing that.

"She says her mind is no longer cloudy.

I say my kidney has made her a genius.

She says I shouldn't get carried away." 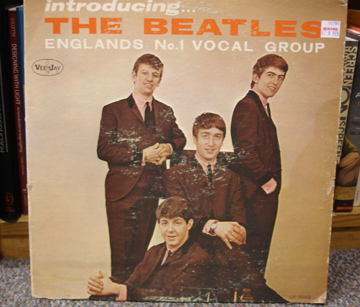 Ever hear of them? 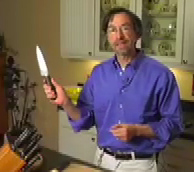 In a video line extension of the Atlantic brand, my fellow columnist Corby Kummer, who covers food, demonstrates how to pick a knife. He believes the handle is what makes all the difference and features an knife-making entrepreneur who uses bicycle grips for that purpose (a great example of the innovative power of new combinations, for all Future and Its Enemies fans).

I'm no foodie, let alone much of a chef, but I'm not convinced. A comfortable grip is certainly important, but it won't make up for a lousy blade. Prompted by Megan McArdle's kitchen blogging, I've become a convert to Kyocera ceramic knives

. They're a great example of repurposing industrial materials for domestic use--and they are scarily sharp. If Kyocera needed advertising for its industrial applications (the way these guys do), the knives would do the trick.

The Manolo on the $400 Haircut

"Of the course, one must question the political wisdom of revealing the high but necessary cost of the hair care while talking like the rabble-rousing populist, but, as the generations of slippery but charismatic Southern politicians and televangelists know, the beautiful and important southern hair can make up for many sins of the flesh and spirit."

Read the whole thing and enjoy the photos.

John Tierney has been following the retrial of Dr. William Hurwitz, the pain doctor accused of drug trafficking because some of his patients misused or resold medications he prescribed. Today's column focuses on testimony from one of the government's paid experts, Dr. Robin Hamill-Ruth, whose attitudes and actions illustrate just what's at stake for patients.

Dr. Hamill-Ruth, who noted that she never prescribed the highest-strength OxyContin tablet, said some of Dr. Hurwitz's actions were "illegal and immoral" because he prescribed high doses despite warning signs in patient behavior that the opioids were being resold or misused.

Then, during cross-examination by the defense, Dr. Hamill-Ruth was shown records of a patient who had switched to Dr. Hurwitz after being under her care at the University of Virginia Pain Management Center. This patient, Kathleen Lohrey, an occupational therapist living in Charlottesville, Va., complained of migraine headaches so severe that she stayed in bed most days.

Mrs. Lohrey had frequently gone to emergency rooms and had once been taken in handcuffs to a mental-health facility because she was suicidal. In 2001, after five years of headaches and an assortment of doctors, tests, therapies and medicines, she went to Dr. Hamill-Ruth's clinic and said that the only relief she had ever gotten was by taking Percocet and Vicodin, which contain opioids.

Mrs. Lohrey was informed that the clinic's philosophy "includes avoidance of all opioids in chronic headache management," according to the clinic's record. The clinic offered an injection to anesthetize a nerve in her forehead, but noted that "the patient is not eager to pursue this option." Mrs. Lohrey was referred to a psychologist and given a prescription for BuSpar, a drug to treat anxiety, not pain.

"You gave her BuSpar and told her to come back in two and a half months?" Richard Sauber, Dr. Hurwitz's lawyer, asked Dr. Hamill-Ruth. Dr. Hamill-Ruth replied that unfortunately, the clinic was too short-staffed at that point to see Mrs. Lohrey sooner. Under further questioning Dr. Hamill-Ruth said that she was not aware that BuSpar's side effects included headaches.

As someone who suffers from comparatively mild migraines, treatable with Imitrex (which itself can feel awfully hard to obtain when you're waiting for a pharmacy to verify your prescription while feeling an invisible spike plunged through your eye), I can only imagine how desperate Mrs. Lohrey must have been. Read the whole thing. And check out Jacob Sullum's 1997 Reason feature on the subject, which should have won a National Magazine Award (it was a finalist) but was beaten out by a far less memorable, but more establishment, feature on computers in the schools published by my current employer.