. Although the context is different, the book's basic theme will be familiar to readers of The Future and Its Enemies (though there's no indication that Easterly has read my book). From the review:

In "The White Man's Burden," Easterly turns from incentives to the subtler problems of knowledge. If we truly want to help the poor, rather than just congratulate ourselves for generosity, he argues, we rich Westerners have to give up our grand ambitions. Piecemeal problem-solving has the best chance of success.

He contrasts the traditional "Planner" approach of most aid projects with the "Searcher" approach that works so well in the markets and democracies of the West. Searchers treat problem-solving as an incremental discovery process, relying on competition and feedback to figure out what works.

"A Planner thinks he already knows the answers," Easterly writes. "A Searcher admits he doesn't know the answers in advance; he believes that poverty is a complicated tangle of political, social, historical, institutional and technological factors." Planners trust outside experts. Searchers emphasize homegrown solutions.

The new book, while well worth reading, isn't as good as Easterly's earlier The Elusive Quest for Growth

, which I highly recommend. As I note in the review, however, that's partly because The White Man's Burden is trying to tackle much more difficult questions.

Dan Drezner reviewed Easterly in Friday's WSJ. (This link does not require a subscription.)

Wired's Autopia blogger John Gartner explains the appeal of hybrids. It's not rational but essentially aesthetic:

While gearheads will pay more for the extra power off the line, we hybrid owners get our jollies from passing by the pump while guzzlers have to visit the Qwik Stop 3 times per week. Just like Porsches and Mustangs, hybrids aren't going away, so those who don't like them will just have to give it a rest.

I don't think it's coincidental that the Prius took off only after Toyota abandoned its initial design strategy, making the hybrid look like an ordinary Toyota, for something cooler. Who wants a hybrid that looks like this?

At some point, of course, rational calculation does enter the equation. Since I drive my car only about 3,500 miles a year, I didn't even look at hybrids.

On his blog, BusinessWeek'sMichael Mandel suggests that journalists and politicians might not be so hostile to steroid use if their jobs required bigger muscles:

But would we be quite so horrified, I wonder, if we were talking about "smart pills" or memory pills instead of steroids? Suppose that a pharmaceutical company was selling a pill that would improve your memory by 30% or your IQ by 30%, with the same sort of side effects as steroids. Would you be willing to take them for 3 or 5 critical years in your career? What if you knew that everyone else was taking them? What if you knew that the Chinese or the French were taking them? And would you be willing to give your kids these pills in, say, the junior year of high school, to increase the odds of getting a good score on the SAT?

I'd challenge that last dichotomy. "Knowledge work" of the kind Mandel and I do isn't the only New Economy skill. Sports is one of those huge New Economy industries that people with high SATs tend to forget. And it's not just a matter of big-time athletes. The guy who would have been a factory line worker a generation ago is now a personal trainer at the local gym, a job that requires more "professional" people skills and personal discipline but is just as physical. Brainpower isn't the only source of intangible economic value.

It's National Kidney Month and I didn't even know it. So much for being the World's Leading Kidney Blogger.

Instead of kidney blogging, I should be finishing an essay on George Hurrell's Hollywood glamour photos. Ah, but there's a connection. Hurrell took some amazing photos of Jean Harlow--before she died of kidney failure at the age of 26. Back then, they didn't even have dialysis. 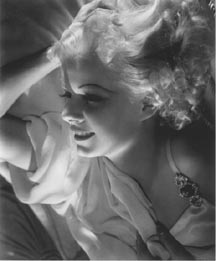 I wrote a Slate slideshow on Hurrell here. My current project is the catalog essay to accompany a major exhibit this summer at the Queen Mary in Long Beach.

In a fascinating post, Grant McCracken explains how some 21st-century kids secured their secret clubhouse. No printed signs were involved.

Kidney patients in Boston can thank economist Alvin Roth (who could really use a website designer) for a clever new system of pairing living donors. The Boston Globe's Scott Allen reports:

Becky Borchert, a Wisconsin nurse, was eager to donate a kidney to her gravely ill friend in New York, but she had type A blood and her friend had type B. Richard Krafton, a school administrator in Massachusetts with advanced kidney disease, had the opposite problem: The friend who wanted to give him a kidney had type B blood, not a match for Krafton's type A.

But last week, Borchert saved her friend's life by giving a kidney to Krafton, a man she did not know, in the first test of a system that brings together strangers to exchange organs for transplant. At the same moment that surgeons at Massachusetts General Hospital began removing Borchert's kidney for Krafton, another surgical team at New York Presbyterian Hospital started taking a kidney from Krafton's friend, Steve Proulx, to implant in Borchert's friend, who asked to remain anonymous.

"This transplant could not have happened if we didn't have this program available," said Dr. Dicken Ko, who transplanted the kidney into Krafton. Organizers say the New England Kidney Exchange, a computer system that matches kidney disease patients with compatible organ donors, could eventually arrange 2,000 to 3,000 transplants a year if applied nationally, giving people like Krafton a way to shortcut the current three- to seven-year wait for a transplant. Krafton got his new kidney and a second lease on life in just under a year.

Read the whole thing. Ah, instrumental rationality--so much better at saving lives than blabbering about the "sacredness" of the body.

In her Bloomberg column, Amity Shlaes (a libertarian woman herself) puts a political spin on the kidney transplant story. This angle never occurred to me going into the procedure, but I suppose it's inevitable when you consider the professional world Sally, whose politics are actually unclassifiable, and I inhabit. Amity's column also plugs a smart tax-incentive idea from Professor Postrel.

From Groundhog Day blogger Dave Rogers, who wasn't quite as lucky as I was with the kidney donation:

Kidney donation is a safe procedure, and it's different, I understand, today than it was when I gave one of mine to my brother on 2 June 1997. He and his bean are still going strong, as am I.

I recall watching CNN in the hospital room right around the day of the surgery when Johns Hopkins announced a new method for removing a donor kidney using a laparoscopic procedure, requiring a much smaller incision with a shorter recovery period (and much smaller scar) for the donor. As usual, my timing was a little off.

These days, all a donor actually has to have is a matching blood type; although the better the match, the easier it is for the recipient in terms of managing against tissue rejection.

If you're in good health, under 60, and actually have two kidneys (How do you know? Has anyone ever checked? Some people only have one!), you're a donor candidate. At the time of my donation, all medical costs of the transplant were borne by the government, because transplanted kidneys are orders of magnitude cheaper than ongoing dialysis and managing the health-related issues attendant to dialysis. I believe that remains the case today. I donated mine on active duty while I was a member of the Board of Inspection and Survey, (kind of like the Spanish Inquisition, but not really), and since my surgery was scheduled over our normal two-week summer break, I think I missed only three weeks of work, and a week of that was for the travel and prep work prior to the surgery. I think the recovery time for donors today is even shorter.

Kidney donation is not without risks, and you'll sign a dozen waivers that will scare the hell out of you. Driving a car is not without risk, and will often scare the hell out of you. There are few things in life anyone can ever do that will make as much of a positive difference to someone else, so it's worth the risk, in my opinion. If you know of someone who needs a kidney, consider becoming a donor.

I heartily second that sentiment. While I appreciate all the flattering emails, donating a kidney is not, in fact, an act of supreme courage or sacrifice. People do harder, more dangerous things every day. Thanks to laparoscopic surgery, my biggest incision is a mere two inches long. I'm not 100% better, but I'm at 85-90%, and that's after barely more than a week. Of course, it's a lot easier if you're self-employed, have a spouse with flexible hours, and have no kids to take care of.

He has an appealing personality--including a sense of humor--and a centrist message, along with a lot of experience. The experience makes him vulnerable, of course, but in a general election I think he'd pull more votes than Hillary. Isn't it time the Democrats nominated someone likable for a change?

A team of researchers in the Materials Science Division at Lawrence Berkeley National Laboratory has managed to imitate the complex structures found in ice and mollusk shells, and the ultra-strong material could lead to everything from stronger artificial bone to airplane parts.

The scientists used the physics of ice formation to develop ceramic composites four times stronger than current technology. "Because we can control the freezing of ice we could get very sophisticated structures," says Eduardo Saiz, a physicist at Lawrence Berkeley and one of the authors on a paper published in January in Science....

Ceramic has been the material of choice in joint-replacement surgeries for years because it lasts longer and produces fewer immune reactions than metal or plastic. It also contain millions of tiny pores that the patient's own bone cells can bind to, strengthening the new joint. But the spongelike structure of conventional ceramic is weak, and can fracture....

The breakthrough came after the Berkeley team realized that similar layered structures formed when mineral-rich water froze. So they tried freezing a mixture of water and hydroxyapotite, the mineral component of bone. As the ice formed, the minerals became trapped between the layers of ice crystals. They freeze-dried the material to remove the ice, leaving behind hydroxyapotite layers similar to nacre's. By increasing the speed of the freezing process, they could decrease the layers' thickness to just 1 micron -- nearly reproducing the scale found in nature.