What about Vanity Fair?

I'm as outraged as anyone about Borders bookstores' spineless decision not to stock the current issue of Free Inquiry, because it includes the controversial Danish cartoons. But I also spent long enough as the editor of a magazine with pitifully small newsstand sales to a) be impressed with FI's publicity stunt and b) figure that Borders is doing Free Inquiry a favor any month it stocks the dinky title. Tiny magazines aren't exactly a profit center. (I'm skeptical of FI's claim to sell 7,000 issues on the newsstand, especially if Borders only stocks 1,000.)

So the test case I'd like to see is this: What would Borders do if Vanity Fair, or some equally big title, published the cartoons? Christopher Hitchens, call your editor.

This Means You, Too

Whatever impressions you may have gotten from advocates, there are no exemptions for native-born citizens in the immigration bills' requirements for a national database to verify employment eligibility. Even DAR members will be at its mercy--and we know databases never have errors.

Glenn Garvin's classic 1995 Reason article on the subject infuriated restrictionists with its heart-rending lead. But it's mostly a tough-minded--and still relevant--look at database problems, something nobody's bothering to discuss this time around.

UPDATE: Here's what happened to Lizbet Martinez (via Professor Postrel).

How do you balance a continuing sense of place--something people value highly--with experimentation, adaptation, and personal expression--also important values? As I discuss in chapter five of The Substance of Style (excerpted here), that's one of the hardest challenges for anyone concerned with the built environment, whether homeowners, city planners, community associations, architects, or developers.

In my latest contribution to D Magazine, I examine how an extraordinarily successful Dallas mall, NorthPark Center, has managed to find the sweet spot for more than 40 years. Its neighborhood has gone from rural to suburban to urban. Retailers have come and gone, as have styles. Yet NorthPark has stayed NorthPark, without major redesigns. The key, as I suggest in TSOS, is figuring out what features constitute the timeless background and which need to be flexible.

It's changing the relationship between entertainment and the entertained. The Manolo explains.

The Dallas Morning News offers an unusually thoughtful perspective on what a sound immigration bill should look like. Best line: "The nation's security is far stronger if we know who's here to frame houses, change linens, bus tables and build microchips--and who shouldn't be here to profit from true criminal activity or worse."

Anti-immigration forces have made great strides politically by cynically conflating terrorists and criminals with dishwashers and construction workers. Any real plan to "secure the borders" should make it easier, not harder, to separate the two. Workers, especially those who want to settle and become citizens (or have their children become citizens), are not threats. They're contributors to American society.

And People Thought I Was Generous (or Crazy)

Focusing on one particular donor, "James," the Arizona Republic's Kerry Fehr-Snyder reports on local programs that encourage people who want to donate kidneys to strangers.

Banner Good Samaritan Medical Center began its program almost two years ago and since has transplanted three living kidneys, including the one from James last month.

The hope is that others will follow, that the idea will be less hard to fathom as organ-donation agencies grapple with a shortage of kidneys. Individual U.S. transplant centers maintain waiting lists with as many as 500 to 1,500 candidates, according to the National Kidney Foundation.

Why would someone donate a kidney to a stranger (when there's ample pressure not to donate even to a friend)? Here's one man's motivation:

A few years ago, James read a magazine article about an athlete being offered a kidney from relatives, friends and fans, and he thought it sad that many lesser-known people can't find donors.

He then learned that a close friend's mother in Tucson was ill and needed a kidney. James exchanged e-mails with her for months, offering to donate one of his healthy kidneys.

But she died before he could make the donation.

"She never complained, not once. She was amazing, just incredibly brave, just an amazing individual," James said.

After her funeral, he realized he still wanted to donate a kidney.

"Kind of putting money where your mouth is," he said.

As its name suggests, the website MatchingDonors.com helps to match would-be donors with people who need transplants.

Der Spiegel has a nice article (in English) on the shipping container. (Via reader Rod McFadden.)

The Box that Changed the World

My latest--and final--NYT column tells just a little bit of the fascinating story of how the shipping container transformed the world economy. Here's the opening, with the obligatory news peg:

The political showdown over a Dubai company's plan to operate terminals at six American ports briefly focused public attention on one of the most significant, yet least noticed, economic developments of the last few decades: the transformation of international shipping.

Just as the computer revolutionized the flow of information, the shipping container revolutionized the flow of goods. As generic as the 1's and 0's of computer code, a container can hold just about anything, from coffee beans to cellphone components. By sharply cutting costs and enhancing reliability, container-based shipping enormously increased the volume of international trade and made complex supply chains possible.

"Low transport costs help make it economically sensible for a factory in China to produce Barbie dolls with Japanese hair, Taiwanese plastics and American colorants, and ship them off to eager girls all over the world," writes Marc Levinson in the new book The Box: How the Shipping Container Made the World Smaller and the World Economy Bigger

My column barely mentions one important part of the story--the regulatory environment. At first, containerization grew through cracks in the rigid regulatory structure of the 1960s. But today's fully integrated systems became possible only after trucking and rail were deregulated in the 1970s and maritime rates were deregulated (to very little fanfare) in 1984. Assumptions about transportation regulation have changed so radically that reading about the bad old days seems like science fiction.

As Levinson said in our interview, "Nobody even remembers what the Interstate Commerce Commission used to do. But you've probably been in the old ICC building on Constitution Avenue in Washington. It had a choice spot in Washington. Important agency, important location, big building. This was a key federal agency. And it spent its time hearing arguments about whether this truck line ought to be able to carry cigarettes in the same trucks as it carried textiles or whether the rates that were being charged to carry pretzels were adequate. People have trouble remembering that today."

is terrific--smart, well-written, and thoroughly researched. I highly recommend it. You can read the first chapter and watch an interview with Levinson on the book's Princeton University Press webpage.

My column was supposed to end with the following note, but editors higher in the chain of command than my boss nixed it:

This column, which marks my sixth anniversary in this space, will be my last. I am taking up a new assignment, writing a column on commerce and culture for The Atlantic, but will remain a devoted reader of Economic Scene.

I'm delighted that Tyler Cowen of Marginal Revolution fame will take over my Times slot, beginning in four weeks.

Here's a mini-interview with me from Sunday's Dallas Morning News. Meanwhile, Sally Satel reports that she's feeling better and is now able to work at her computer. According to her transplant surgeon, she says, "Our kidney is doing magnificently."

Speaking of cars, I'm a week late linking to Phil Patton's fascinating NYT article on mid-century automotive illustration, examples of which are currently featured in a Detroit museum exhibit. These illustrations demonstrate that glamour doesn't depend on a particular style or a Hollywood context. These illustrations don't look at all like Art Deco artifacts or black-and-white studio stills, yet they create a similar effect--an emotional, imaginative process in which the audience projects itself into an idealized world. From Phil's article:

Curators of the Detroit show are Jared Rosenbaum and Rachel Mackow of the Palace of Culture, an online "museum" of futuristic design, and Mark Patrick of the Detroit Library. They reached into a rediscovered cache of images by Arthur Radebaugh, an advertising illustrator best known for dreaming up and painting fantastic vehicles — streamlined flying buses, hovering monorails and other wonders of the future — in advertisements for Bohn Aluminum & Brass. In the 1930's, Radebaugh turned out gleaming images of production-line Dodges and Chryslers set against Buck Rogers backgrounds.

Many paintings in the show come from the collection of Jim Secreto, a photographer in Clarkston, Mich. Mr. Secreto found the images while working in the files of Detroit advertising agencies. "I fell in love with these illustrations for their romantic quality," he said. "They project an ideal lifestyle and fantasy that a lot of thought and effort went into creating."

Mr. Secreto said that his profession, photography, ended that of the auto illustrators. But it took a long time; photography gradually replaced illustration in most print advertising during the 1950's because it was less expensive and more versatile.

In auto advertisements, though, illustration dominated through the 1970's because painters could render effects that photographers could not. Before digital image manipulation existed, painters did a better job of romanticizing the cars, elongating and widening them, emphasizing highlights and shadows to bring out sculptural qualities....

Such manipulation was common. In some cases, the show's curators said, skilled specialists took photos of cars, sliced them up and separated the pieces ever so slightly to produce an elongated image for painters.

The effect of this style was to lend a touch of fantasy and magic to the images, making them touchstones of their era. A 1960 image of a Ford Galaxie cruising through downtown Detroit, by Ross Cousins and John Killmaster — they were among the most respected advertising illustrators — captures a bright morning scene, offering a broadly optimistic vision of life in America.

In his new book, Culture and Consumption II

, Grant McCracken has a fascinating essay called "When Cars Could Fly," documenting the connection between jet age imagery, automotive styling, and mid-century metaphors of personal ambition. 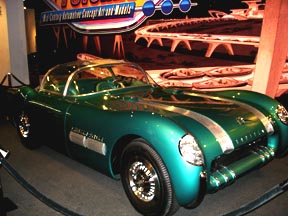 Last summer, Steve and I saw plenty of evidence for Grant's thesis at the Petersen Automotive Museum's Driving Through Futures Past, an exhibit that included both illustrations like the one above and a few prototypes like this Bonneville Special.

These exhibits pay tribute to culturally significant artwork that barely escaped the trash. As Phil writes:

The work of the designers was never meant to be saved, Mr. Sharf said. The studios at General Motors and other automakers produced thousands of sketches, of which only a few were spirited away — somewhat illicitly — by the designers. Most of the designers remain anonymous.

Part of Mr. Sharf's collection has been shown at the Museum of Fine Arts in Boston, and some works from the collection will go on display in Japan in September at the Toyota Museum and at the Nagoya Museum. The collection is also documented in a new book, Future Retro: Drawings From the Great Age of American Automobiles

Mr. Sharf"s collection gives prominence to Richard Arbib, a versatile designer whose work included Packards as well as speedboats, outboard motors and the 1957 Hamilton Electric Ventura watch. Mr. Sharf said his favorites included a set of 20 drawings that show the evolution of Pontiac's Indian hood ornament into a futuristic jet airplane. "They were done in three days in June 1954," he said.

"My hope is that someone will dig into this material in a scholarly sense," Mr. Sharf said. "They didn't realize their importance then, and many still don't, but these men are important."

, to which I contributed the lead essay (excerpted here). For more on automotive illustration, check out the links I've added to the article. In addition, the online museum Plan59.com, formerly Ephemera Now, has a nice collection of Bohn ads, including this one, which I bought as a poster.